To hear him tell it, one might think that Colten Garland ’20 was talking about his life as a basketball player.

“There are a lot of moving parts in the background,” he said. “If one of those things is messed up, it costs us. Coming in, I was kind of prepared for that, but from day one I’ve been focused on limiting the errors as much as possible.”

Garland wasn’t talking about Little Giant basketball. He spoke of his time interning last summer, where he was a key part of a two-man team at the Obvious Shirts Company, working closely with owner Joe Johnson ’11 in growing a small business. 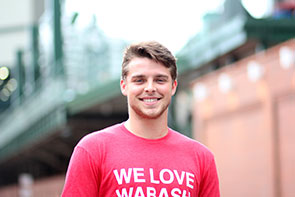 “Colten has had more responsibility, more work on his plate, in terms of deadlines and production,” said Johnson. “It’s way more rapid fire day-in and day-out. He saved my days. It made me realize with the growth I’ve had, I need full time help.”

Ever the good teammate, the former North Coast Athletic Conference Newcomer of the Year would have made any coach proud with his understanding of adjusting quickly to the business world.

“It’s crucial for me to be consistent,” said the senior from Washington, Indiana. “I need to be exact and precise. For every order, for checking inventory, I need to pay attention to detail and make sure everything is where it needs to be.”

Garland was largely responsible for fulfillment, processing orders, and shipping merchandise to customers. He was the last and essential link from product to consumer. Getting the order right is paramount, especially in an age where a bad review can go viral.

“Fulfillment seems like easy stuff, but there is quite a bit of work to make sure that the product is ready to ship,” Johnson explained. “Everything has to match. Everything has to be exact.”

“I’ve relished that role and tried to make that happen as often as possible,” Garland chimed in, as the two chatted in the Obvious Shirts headquarters, a block east of Wrigley Field.

Accepting such a role led to a great deal of learning for the political science major with plans on law school. Johnson helped by tailoring parts of the day-to-day operations to benefit Garland. He routinely sits in on conference calls with lawyers. There is talk of the business of dealing with agents, agencies, contracts, and copyright and trademark protection.

“This has been pretty cool for me,” said Garland, who studied for and took the LSAT while working in Chicago. “It opened my eyes a little more about what goes on and how important a good attorney is behind the scenes for a company like this. My knowledge of business has grown and there is a lot of that knowledge that goes into law. Getting to see that side of the small business world was something I didn't necessarily expect, but I predict it will be an important learning experience for me moving forward.”

Johnson takes a real-world approach when asked of Garland’s summertime growth. While acknowledging that where the t-shirt business may lack complexity, it makes up for that with a time-honored Wabash trait.

“Running a small business makes you think critically, and Wabash has taught us that very, very well,” he said. “Colten has learned to think on his feet. 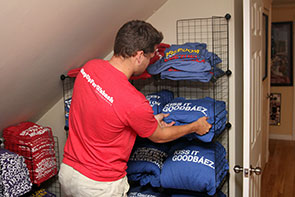 He’s learned how to react quickly. That mindset, the application of what you’ve learned to what you are doing is going to bode well for him. That is a skill that needs to be tested, and this type of environment does that.”

Garland’s ability to perform under pressure has been proven time and again, and his attention to detail has served him well in his ability to learn in new situations.

“The lesson I learned this summer is that you can't build a business and compete in the market without building the right relationships,” he said. “Not everyone is an enemy in that kind of business, particularly in the earlier stages. That's been a huge part of the growth of Obvious Shirts and surely will continue to play a big role. Joe's been able to find a really good balance of knowing which battles to pick and which people he wants to keep in his corner.”

Garland’s internship was underwritten as a Wabash CIBE Innovation Intern.