Two Wabash College seniors received the highest honors for a Wabash graduate Saturday morning when they were recognized at the traditional Deans’ Senior Breakfast.

Austin Dukes was awarded the John Maurice Butler Prize for Scholarship and Character and Riley Lefever was named the winner of the Frank Hugh Sparks Award for All-Around Student Achievement. 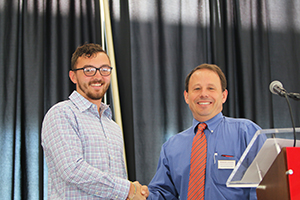 Given annually since 1923, the John Maurice Butler Prize for Scholarship and Character is voted on by the entire Wabash faculty and is given to a student of high character and great ability.

Named in honor of the College’s eighth president, the Frank Hugh Sparks Award for All-Around Student Achievement is given to a senior who has done the most to promote the true spirit and purpose of Wabash College. 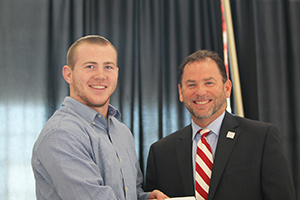 A native of Ft. Wayne, Indiana, Lefever was most recently named to the 2017 Academic All-District Men's At-Large First Team as selected by the College Sports Information Directors of America. The four-time national wrestling champion became the second NCAA DIII wrestler and the 11th in the history of the NCAA to capture four national wrestling titles in a career. The English major and history minor will graduate cum laude and is the only four-time winner of the Pete Vaughan Outstanding Athlete Award in school history. Lefever served as team captain for the wrestling team and also served as the Head Residential Assistant.

The breakfast concluded with remarks from Dean of the College Scott Feller, who reminded students of all the other great talks they have heard over this past year – from larger settings in the Chapel to the smaller ones in classrooms and offices.

“I hope it’s the conversations with the faculty, staff, and your fellow students that you’ll remember from this year,” Feller said, “and not the few minutes that you’ll spend listening to me.”

Feller told the students that they have a lot of transitions they’re about to experience in their lives. After they graduate, many will leave Crawfordsville to begin a new job or to even further their education. Some of them are getting married in the summer.

“I have to tell you, the transitions keep coming, and they’re normally accompanied by a little bit of nervousness,” Feller said. “Reflect on them when they come. Take advantage of them. Use these as opportunities to change your path for the better.”

Wabash celebrates its 179th Commencement Exercises on Sunday at 2:30 p.m. on the College Mall. The ceremony will be streamed live at www.wabash.edu/live.