The academic finish line arrives with a turn of the tassel as Wabash College celebrates its 179th Commencement exercises on Sunday, May 14, at 2:30 p.m. on the College Mall. The ceremony will be streamed live at www.wabash.edu/live

President Gregory D. Hess will lead the procession and will ring out the Class of 2017. One hundred eighty-nine men men are scheduled to receive their sheepskin diplomas in the ceremony.

Two graduating seniors, Adam Burtner and Bilal Jawed, will be the only featured speakers at the Commencement in keeping with a long-standing Wabash tradition.

Mr. Burtner majored in rhetoric and minored in religion and political science. The Phi Gamma Delta member was a Senior Fellow with the Wabash Democracy and Public Discourse initiative (WDPD), and was involved in Student Senate, Pre-Law Society, College Republicans, and Parliamentary Union Debate Team. In addition, Burtner was a student orientation mentor, an opinion columnist for The Bachelor, president and founder of the Wabash ONE Campaign, President of Lambda Pi Eta Communications Honor Society, and Vice President of Sons of Wabash. Following graduation, he will serve as the Executive Director of HATCH for Hunger, an Indianapolis non-profit fighting hunger through community and corporate partnerships. He is the son of Laurie and Don Farris of Brownsburg, IN. 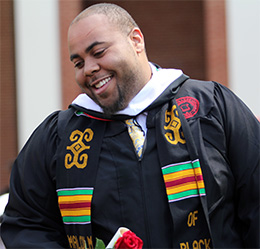 Mr. Jawed double majored in biology and Spanish and minored in chemistry. The Global Health Fellow is a founding member of Delta Tau Delta, Phi Beta Kappa, Ultimate Frisbee Club, and served on the audit and finance committee as a member of student government. He was president of the Muslim Student Association and the Public Health Organization and was integral in the establishment of the campus-wide Mental Health Concerns Committee. Jawed served on a global health campaign in Peru, as an environmental specialist at the Montgomery County Health Department, as an infection preventionist at IU Health, and an HIV/AIDS research assistant in Uganda. The winner of the Lewis Salter Memorial Award and the Eliot Churchill Williams Undergraduate Prize of Biology was a biology QSC tutor and campus photographer. Following graduation, he will attend medical school with the hopes of one day conducting health research in developing countries. Jawed is the son of Syed and Naheed Jawed of Indianapolis.

On Saturday, May 13, 22 students will be inducted into the Wabash chapter of Phi Beta Kappa, the nation’s oldest honorary society. To be inducted this year are seniors Cameron Brown (Chandler, IN), Beidou Cheng (Nanjing, China),

Commencement Day at Wabash begins at 11 a.m. with Baccalaureate, which will be held in Pioneer Chapel. Reverend Libby Davis Manning. will give the Baccalaureate sermon. Manning is Pastor of Ministry and Maturity at Christ the Savior Lutheran Church in Fishers, IN, and the Associate Director of the Wabash Pastoral Leadership Program.

At the conclusion of the Commencement ceremony, President Hess will guide the graduates through the Senior Arch and proceed to the steps of the Allen Center, where the Class of 2017 will sing “Old Wabash” for the first time as alumni.

Following the ceremony, there will be a reception for the Class of 2017 near the Frank Hugh Sparks Center west portico (between Morris and Wolcott Halls).

In the event of inclement weather, Sunday’s Commencement exercises will be held in Chadwick Court of the Allen Athletics and Recreation Center.

This week’s edition of the “Wabash On My Mind” podcast talks with 2017 Commencement speakers Adam Burtner and Bilal Jawed. Topics include their Wabash experiences, favorite memories, and preparing for Sunday's speeches. Just click the play button at the bottom of the graphic to enjoy an audio preview.