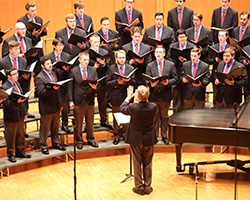 The Wabash College Glee Club will present its Campus Concert at 4 p.m., Sunday, April 9, in Salter Concert Hall in the Fine Arts Center.

The men of the Glee Club recently returned from their 2017 Spirit of America Tour that featured performances in Gettysburg, PA, Hershey, PA, Philadelphia, PA, and Washington, DC. On the heels of that trip east, the Glee Club will share their music with the Wabash community Sunday afternoon. The program includes several “cathedral-suitable” selections, including Franz Biebl’s Ave Maria Angelus Domini, The Battle Hymn of the Republic, a barbershop harmony, The Chordbuster’s March, and Isle of Hope, Isle of Tears, a song that tells the tale of the first immigrants to pass through Ellis Island. As an added bonus, the men of the Glee Club will perform the ‘original’ Old Wabash.

The Glee Club is under the direction of Dr. Richard Bowen and is accompanied by Ms. Cheryl Everett.

The concert is free and open to the public. A reception in Littell Lobby will follow the concert.