The new residential life district on the west side of campus is open and in use. The residence halls and townhouses opened for the spring 2016 semester and the lodges were ready for students to reside in this summer.

The new housing is scoring rave reviews among current students living there and first-time visitors. It’s rare not to hear a “wow” or a “whoa” from the uninitiated.

The amenities in the rooms are quite popular with the residents.

“I’ve never seen a dorm like this. It’s like a hotel room. The bathroom is insane,” said Jonathan Montoya ’18, who is serving (a mentorship) in the admissions office over the summer. “They were really smart to put in these skylight-type windows. I don’t even turn on the lights because they let in so much light, which probably saves a lot of electricity.” 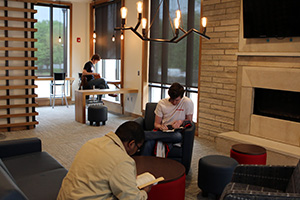 Of the room, Montoya said, “It’s really spacious, too. I’m on one side and my roommate’s on the other so it’s a ton of space.”

Many students living in the new district agree that the rooms compare more to apartments than a normal dorm. When asked to compare his summer residency to a dorm, Kappa Sigma brother Andrew Merced ’19 said, “One of the guys in the house just graduated, and said that this was even nicer than the apartment he was going to get. It’s nice, it’s new. It’s definitely enjoyable to live in.”

Merced added, “The kitchen appliances would probably be the best part because it’s nice to have your own fridge and microwave. You have to go out into the common area to use the stove and oven, but it’s perfectly fine.”

The new housing also provides rooms with views.” Shaun Khoo ’19 described his room last semester, saying “I was in the second floor in Rogge and we could see Crawford Street and people walking by.”

Khoo then quipped that “When the webcam was set up, I could tell my parents to ‘look at that window, you could see my light turn on. You’ll know when I go to bed.’ That wasn’t the best idea,” he laughed before adding, “The view from Rogge is a nicer view.”

The views should improve as the grass sprouts in time for the Class of 2020 to arrive and realize the full potential of the new housing district.