FARMVILLE, VA. – Wabash’s Little Giant football team made it a sweep over the Hampden Sydney Tigers Saturday afternoon, 35-3. The second Gentlemen’s Classic was played on the picturesque Virginia  campus in stifling heat and humidity.

The winning template was familiar to any Wabash fan. After an initial field-goal yielding drive, the LG defense shut down the host Tigers the rest of the afternoon. 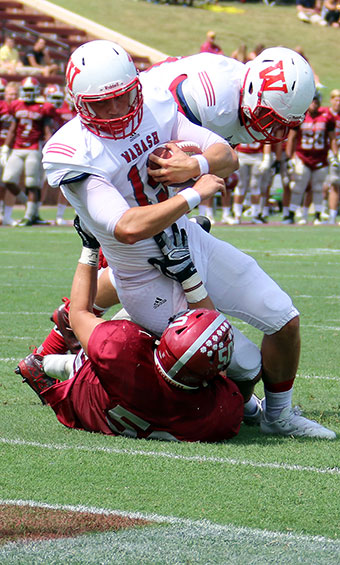 The two-game sweep over HSC ends a home-and-home agreement with one of the nation’s few other all-male institutions. The Little Giants will take advantage of the east coast visit more Sunday.

Stifling would also be a way to characterize the Wabash defensive effort. HSC had just 84 yards of total offense to Wabash’s 406 and 89 passing yards to Wabash’s 154. While the defense barely missed a beat from a year ago, the offense pounded away to 35 points despite four interceptions.

Coach Erik Raeburn was very pleased with the win and more excited for the opportunities made possible for his athletes.

“It’s great for our program and it’s something that helps us in recruiting,” he said. “And the trip was possible because of the generosity of our alumni. This is something Division III players at most schools don’t get to do.

“Then the most special part will be Sunday morning, putting a wreath at the Tomb of the Unknown Solider (at Arlington National Cemetery). Our guys are really excited for that.”

After the ceremony the student-athletes will have about two hours to explore the National Mall.

The offensive line turned in the day’s most monumental effort. Seven different LG ball carriers combined for 62 carries and 252 yards. The ground-it-out total is even more impressive considering the longest run of the day was 18 yards. Mason Zurek was responsible for that 18-yard run and 25 more for a 134 total and two touchdowns.

“We had a lot of guys coming back this year,” said junior lineman center Kyle Stucker. “We have great continuity with this group so really it has been sorting out the little things and getting some chemistry.

“It seemed like we were out there for the whole game.  We had 16-play drive one time … we may have to do some more conditioning because that was a lot of work. It was grinding it out – four-yard gains at a time.”

Raeburn couldn’t have been more proud of his linemen. “We felt like we ran it okay against them last year but felt like we’re better upfront than we were last year. And basically it’s all the same guys but a little bit bigger, a little bit stronger, and a little bit more experienced.

After the Tigers opened scoring on a 22-yard field goal it was all Wabash. Zurek scored his first touchdown of the season with seconds left in the first quarter. Connor Rice added the next Wabash TD on a two-yard run after a nifty effort on an 18 yard catch by Matt Dickerson.

“I was able to catch it in stride and turn up the field and then tried to out run the defense to the end zone,” Dickerson said. “I tried to reach the pylon with the ball; one official thought I was in but another said I stepped out of bounds. Connor (Rice) put the pass right on the money.”

It was a mixed bag for the Little Giant quarterbacks. Michael Putko and Rice rotated series as they did the second half of last season. Putko was 7 of 13 for 65 yards and two interceptions while Rice threw 7 of 12 for 89 yards with two interceptions. Each quarterback had a rushing score.

Wabash will be off next week then travel Sept. 19 to open NCAC play at Allegheny. Wabash’s first home game will be Sept. 26 hosting Wittenberg.