Wabash College was founded on November 21, 1832. The founders were all young and, while full of faith and energy, not one of them had any financial means. A meeting was held in the home of James Thomson, who was considered the motivating force for the idea of a college here. All who attended the meeting agreed that if the Wabash Country, as this section of Indiana was known, was to have enough preachers and teachers, it would need to educate them from among the boys of this area.

The day after the founding meeting, a group of the men chosen as trustees of the college walked to land that was donated in the frontier town of Crawfordsville, Indiana and knelt in the snow and conducted a dedication service. According to the early documents, it was decided, "that the institution be at first a classical and English high school, rising into a college as soon as the wants of the country demand."

The first faculty member of Wabash was Caleb Mills, a graduate of Dartmouth College and Andover Seminary, who arrived in 1833 and immediately established the character of the school. As noted by Byron Trippet, who was associated with Wabash College for forty years as student, teacher, dean, and president, "by his ideals, his vision, and his abundant energy [Caleb Mills] gave to this college a sense of mission, which it has occasionally neglected, but has never completely lost."

Caleb Mills later became the father of the Indiana public school system and worked tirelessly to improve education in the entire Mississippi Valley. Each fall, Caleb Mills' bell is used to "ring in" the freshman class as students of Wabash College, and each spring the bell "rings out" that year's class of Wabash men as they move on to new challenges.

Wabash College has always been independent and non-sectarian, although its founders and Caleb Mills were Presbyterian ministers. The school was patterned after the conservative liberal arts colleges of New England, with their high standards. Caleb Mills declared the aims of the college to be learning, virtue, and service.

Read much more about the College's history at Dear Old Wabash, a blog about the history of Wabash College.

For historical questions about Wabash, contact the archives at swiftb@wabash.edu 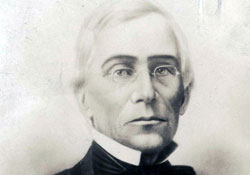 "The poetry in the life of a college like Wabash is to be found in its history. It is to be found in the fact that once on this familiar campus and once in these well-known halls, students and teachers as real as ourselves worked and studied, argued and laughed and worshipped together, but are now gone, one generation vanishing after another, as surely as we shall shortly be gone. But if you listen, you can hear their songs and their cheers. As you look, you can see the torch which they handed down to us."