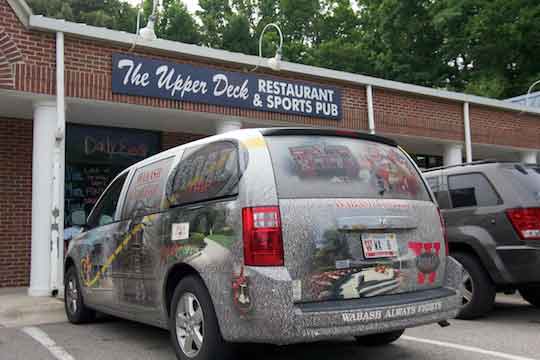 We're on a roll - the Upper Deck also had great wings - we ended up with a double-double order.  Mike Boyd '63 and his wife Betty were the first to arrive - Mike was sporting his Class of 1963 Big Bash polo shirt AND his 50th Reunion medallion. 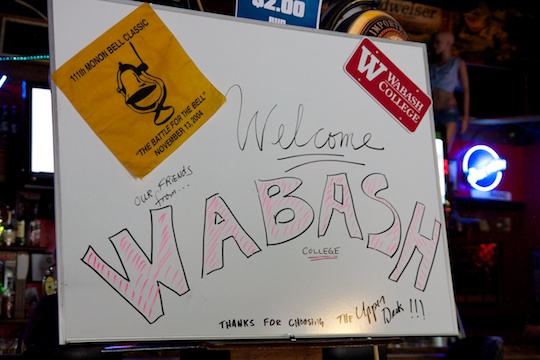 The Upper Deck ladies  had the Welcome sign out and everything - they regularly host the Monon Bell telecast party.

Overall, a fun Road Trip.  By the time the guys get home, they will have logged some 3,000 miles on the van.  A great time was had by all!

June 23, 2013 - Day Eight –The Road Trip crew joined Wabash alumni and their families for a day at the ballpark with a good game between the home Washington Nationals and the Colorado Rockies.  The Rockies led for most of the gam 7-2 but an 8th inning rally closed the gap to a single run.  Unfortunately, that’s as close as they got.

Before the game started, it was pure craziness at the gates.  There were Bryce Harper Bobbleheads – 15,000 of them – available to the first arrivers.  As you can see, it was a madhouse.

The Wabash crew was spread out so a group shoot wasn’t possible.  However, a good time was had by all. 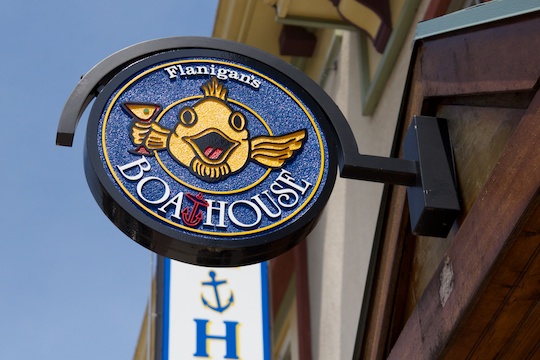 June 22 - Day Seven.  We're at Flanigan's Boathouse in Conshohocken, PA - just north of downtown Philadelphia.  Write this one down - Flanigan's for wings and Oreo Cookie Sundae.  Period!  The wing's were incredible and the Oreo Cookie Sundae - well, it was lick-the-plate good!

Here's an early picture with the three Amigos and Brad Maxwell '83 - that's before everyone jumped right into the wings. 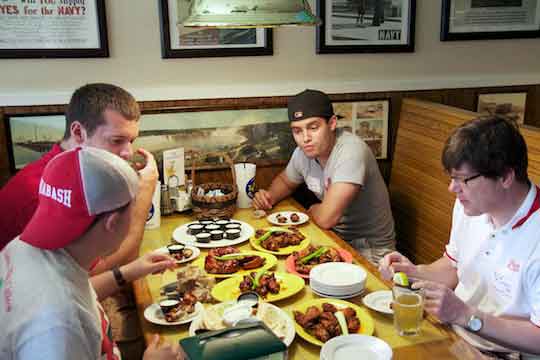 The guys have been to a Mets game, Red Sox game and tomorrow we take in the Nationals.  To say nothing of starting off with the Lake County Captains!!! I think they also got a glimpse of the New York skyline in the early hours. 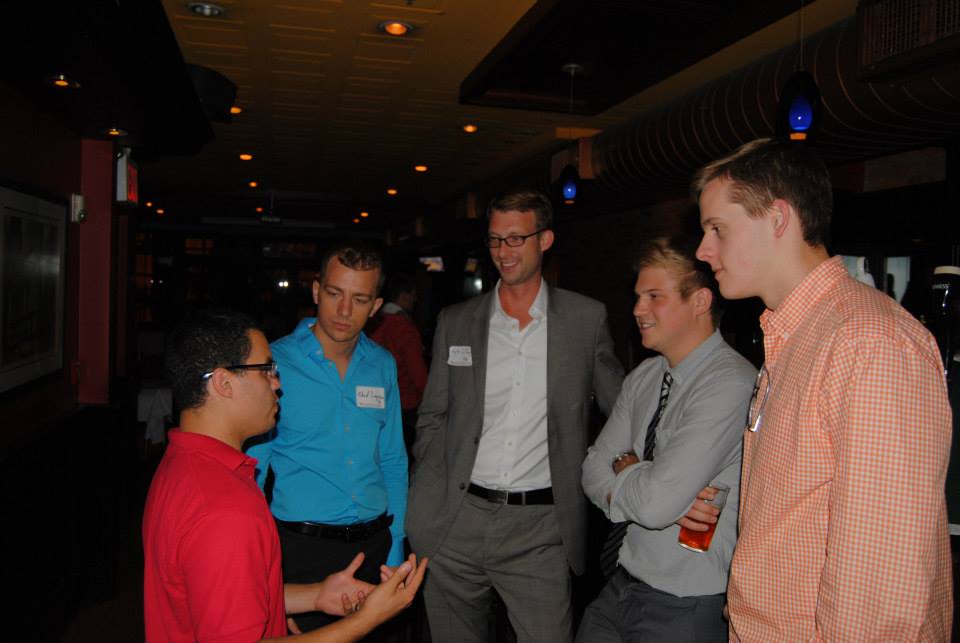 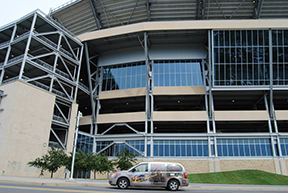 June 19 - Day Four.  The guys traveled from Pittsburgh to Boston on the off day yesterday making a stop or two along the way including one in Happy Valley (Penn State - photo above).  After entering Fenway Park like they owned the place for the Red Sox game (walk-off victory) they have arrived at Cambridge Brewing Co. near the M.I.T. Campus. 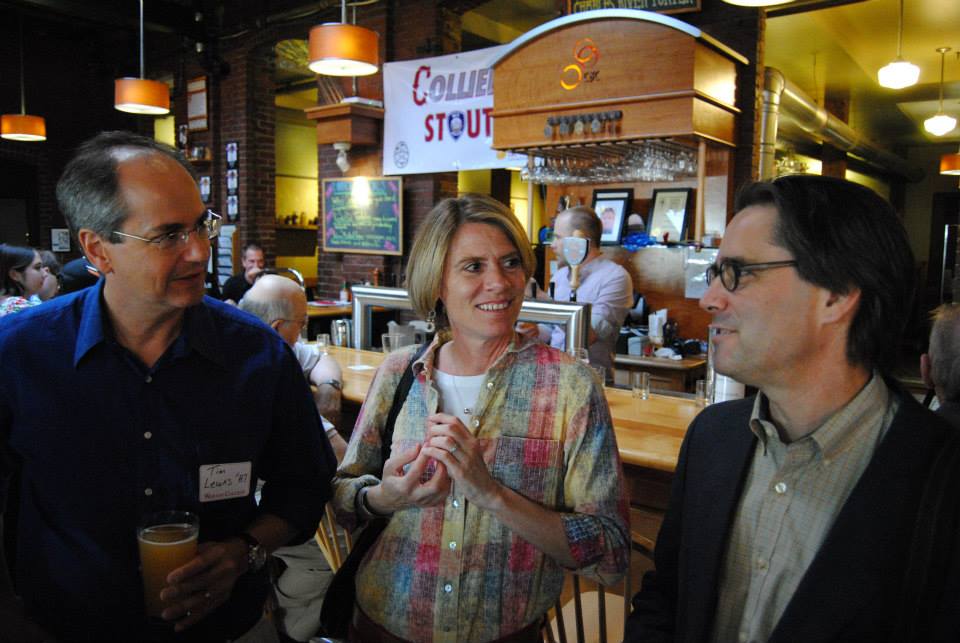 This night was about connections.  Example...Wabash alumni from the same era meeting for the first time at this event learned they work for the same company in the same building and have for at least 6 months.

June 17th - Day Two - The site of the second stop on the 2013 Road Trip was Bar Louis, just across the Monongahela River from downtown Pittsburgh.  Following that get-together, several attendees took an hour-long cruise on the river for a sightseeing tour of the city.

Dick Cherry '49, up for his 65th reunion this coming June, was the most senior alumnus present while Seth Tichenor and Will Hoffman from 2010 were the youngest. A good time was had by all.

The boat ride was interesting.  Kahlil Carazo showed his history bent and knowledge as he was able to name the six professional sports teams in Pittsburgh.  Our tour guide was very impressed.

This leg was very successful thanks to good planning and execution by Kahlil Carazo ’14 working with local alumnus Lyndall Huggler.

On to Boston where the rumor is the Road Trip crew snagged tickets for Fenway Park!

Thanks to local alumnus Terry Evitts '78, who provided a suite at the Ballpark, the group enjoyed a superb view of the field.  The Captains didn't win - losing 6-2 to the Great Lakes Loons - but the skies parted, the early morning rains left, and the Wabash group enjoyed superb weather and very good baseball.

Rudy, Andy, and Kahlil introduced themselves and talked to every attendee.  They passed out the limited edition 2013 Road Trip t-shirt (see photo) and also did a raffle for a Bookstore gift card.  It was a great start to what is shaping up to be the longest, biggest Road trip yet.

This leg superbly planned by Terry Evitts '78 and Rudy Altergott '13.