The Wabash College Pre-Law Society welcomes Michelle H. Browdy to campus as the 2022 recipient of the Senior Peck Medal for Eminence in the Law.

She is responsible for IBM’s global legal, security, corporate governance and compliance activities and policies, as well as IBM’s environmental and government and regulatory affairs functions.

Following the lecture, the College will host the David W. Peck Awards Banquet. Established in 1974, the banquet 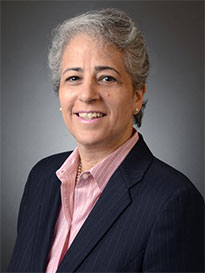 provides a unique opportunity for Wabash students interested in the law to meet lawyer alumni and to benefit from the wisdom of the Senior Peck Medal recipient. The event also recognizes student Pre-Law Society award winners.

“Michelle is a national thought leader on the intersection of privacy and technology,” said Scott Himsel, Associate Professor of Political Science and advisor to the Pre-Law Society.  “She began her legal career here in Indiana as a law clerk to Chief Justice Randall T. Shepard.  We are thrilled to welcome her to Wabash for what promises to be an excellent lecture on a number of key privacy issues.”

Prior to her current position, Browdy served as Secretary to IBM’s Board of Directors from 2012-14 and as IBM’s worldwide head of litigation, overseeing IBM’s intellectual property, antitrust/competition, employment, class action, securities and commercial litigation globally from 2009-14.

Browdy has served as a Board member of the Pro Bono Partnership, Vice President of the Executive Committee of the Yale Law School Association and was appointed by the Chief Judge of New York State to the Commercial Division Advisory Council in 2013 since coming to IBM.  She currently is a member of the Board of Directors of the U.S. Chamber of Commerce, and previously has acted as a Special Assistant Attorney General for the State of Illinois and taught Trial Advocacy as an Adjunct Professor at Northwestern University School of Law.

"(Browdy) brings together an extraordinary set of skills at IBM, intellect and superb judgment, vast experience in the courtroom, a hunger for knowledge, and an ability to anticipate what's coming next," said Scott E. Feller, Wabash College President. "Her impressive achievements at the highest level of law and business, coupled with a genuine kindness and humility, provide a perfect example for our young men to follow."

The Peck Awards Banquet honors the memory of alumnus David W. Peck, Class of 1922, a Harvard law graduate who founded the litigation department at Sullivan & Cromwell, served as Presiding Justice of the Appellate Division of the New York Supreme Court, and was a long-time member of the Wabash College Board of Trustees.