It’s not often a freshman gets a major role in a production. However, that is exactly what happened for Logan Weilbaker ’25.

Weilbaker’s parents instilled in him a passion for the arts, and he knew that he wanted to be a part of Wabash’s theater program as soon as possible. He just didn’t imagine it would be in such a prominent role.  Weilbaker and Professor of Theater Michael Abbott discussed what it’s like for a freshman to emerge at such an early juncture in their college career.

Logan, when did you first get into acting? What was your first big role? 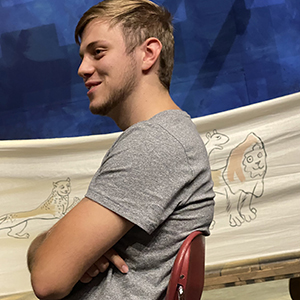 LW: Acting and theater is my passion above all else. I've done it pretty consistently for the past 9-10 years. In my first major role, I got cast my freshman year at Scottsburg High School as the scarecrow in The Wizard of Oz. Ray Bolger, the guy who played the scarecrow in the original movie,  is one of my all-time favorite icons. I love the way he acts. I just went all out and had so much fun.

What were your expectations coming into your first audition at Wabash?

LW: I knew from reading the script that it was a small cast, so I didn't have a whole lot of confidence. But I knew that it was something I was going to try to shoot for. What's the worst that can happen? I had a pretty big hunch that I was going to be on set duty, and I was totally fine with that. I was preparing myself to pull some curtains.

Dr. Abbott, what stood out to you about Logan’s audition?

MA: He was versatile. I thought of him for various parts. It's nice to have an actor who you could slot in different ways, depending on how you cast other roles. By the second evening of auditions, it became more and more clear that he was ready for this role. He immediately understood that the character in the play is an empathetic and soft character who has a big heart.

Logan, what was your reaction when you found out you got the lead role?

LW:  To say I was shocked when I read my name on the cast list is really an understatement. The first reaction I had was, ‘Oh, crap.’

Dr. Abbott, were you hesitant at all to cast a freshman in such a major role?

MA: I was nervous about the idea of putting that much on a freshman. Joe Mount ’15 is the last actor I cast in such a big role as a freshman, and he's one of the best actors that's come through this program. It was helpful to have had such a good experience with Joe, because they remind me of each other a little bit. Very much all about their work. They're not very distractible.

What has it been like to watch Logan develop from the time he auditioned until now?

MA: He's the kind of actor who will make things happen in between rehearsals. He'll go home and think about it a lot and work out in his mind what he wants to do. He'll come back, and you can see things that have happened out of your view.

Logan, what has it been like preparing for a lead role despite only having been on a college campus less than two months?

LW: I've got to give a huge thank you and shoutout to Dr. Abbott. He’s not trying to tell me how to do it or tell me ways to fix what I'm doing, but helping me along the process of understanding where I am, where I need to go and how to get there. Everyone on the show is older than I am and has been so supportive and helpful. It's been a phenomenal environment where I’ve been able to grow and cultivate myself.

Dr. Abbott, how do you think this role is going to prepare Logan for the rest of his career?

MA: He reminds me a little bit of myself. When I was a freshman here, I got cast in big roles pretty quick. The trick will be for him to figure out what his next set of challenges is going to be, and then hope the faculty can work towards helping him meet those challenges. Some of those challenges may not ultimately be performing. I got kicked over to stage manager for a Shakespeare production that I was desperate to be in. The director said, ‘You’ve not stage managed, and you need to do that if you're going to be a theater major.’ If you're really hungry to be an artist, you need to figure out what the full-bodied version of that is, not that narrow specialist version.

Logan, where do you see yourself going from here, academically and theater-wise?

LW: I'm trying to sample a lot of different things and figure out what I like and what I'd like to keep doing. I look forward not only to acting and being on stage, but getting other experiences behind the scenes during set work, costume work, anything I can get my hands on. Theater teaches you so much because there are so many different things that are involved.

What are your expectations for opening night?

LW: I'm typically one that gets nerves, and I welcome them, especially on opening night. I've always been pretty good about channeling those nerves into energy. I don't like to let it just sit there. If you're backstage before opening night, you'll probably see me running around doing a lot of jumping jacks, any sort of movement to keep my energy levels up. Opening night is such a magical night because there’s that buzz and energy in the air.