Live Theater Returns with The Amateurs Performances are scheduled for 8:00 p.m. Wednesday, Thursday, and Saturday and there 2:00 p.m. matinee on Sunday. Free tickets can be reserved through the Fine Arts Center Box Office. 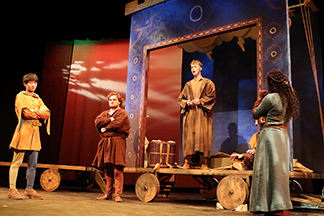 Director Michael Abbott says he and the cast are thrilled to be back on the Ball Theater stage.

“It’s easy to take live performances for granted until they disappear,” Abbott said, and as a result, “an unusually large pool of actors turned out to audition for this show, which I attribute to our students being excited to return to the stage in full force.”

And Abbott is pulling no punches with the selection of The Amateurs as the first show out of the gate this year. The play was a New York Times Critic’s Pick when it opened Off Broadway at the Vineyard Theater in 2018. Times critic Jesse Green wrote, “The Amateurs wants to be seen with a form of double vision in which the past and the present are both present. We are meant to be vigilant about the ‘luxury of fiction,’ with its false sense of endings.”

The Amateurs follows six actors as they romp across Europe staging a series of poorly acted, yet thought-provoking, often hysterical, and occasionally non-sensical morality plays – within the play itself. The troupe fast-forwards through time from the medieval era of Black Death to more current times of the AIDS epidemic. Ultimately, the Wabash actors will ask the audience to think seriously about this current time of pandemic and loss, and the role of art and artists in harrowing times.

“Artists respond to the moment and to what’s happening around us,” Abbott says. “This play squarely addresses the struggle for survival in a pandemic, but it does so in a wildly entertaining way. It’s a dark comedy, which gives us a channel of communication to engage big, difficult questions.”

COVID-19 has led to everyone asking plenty of “big, difficult questions,” for sure, but The Amateurs uses Biblical text, morality plays, and human experiences to ask similarly big questions across the centuries. At one point, the play comes to an unsettling halt to break down the fourth wall of the theater to question God, the nature of sin, and how society often turns its back on those who are most needy. 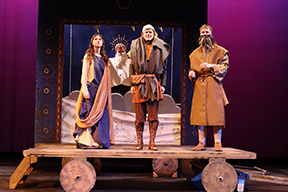 The cast, while small (seven), faces enormous challenges as they play a wide range of characters in the plays within the play, and even step out of character from time to time.

The cast includes: Logan Weilbaker ’25 as Gregory; Eli Akers ’22 as Larking; Betsy Swift as Hollis; Drew Johannes ’23 as The Physic; Sebastian Wang ’22 as Brom; Katherine Glasper as Rona; and Sarvik Chaudhary ’25 as Major-Domo. Weilbaker, Chaudhary, and Glasper are each making their Ball Theater debut.

“This production is a mix of Wabash theater veterans and newcomers” Professor Abbott says. “We have two senior theater majors and two first-semester freshmen in the cast. We’re very excited about the big turnout of freshmen we saw at auditions. It bodes well for the future of our program.”

Audience members will be asked to wear face masks during the production, which runs less than two hours, including an intermission.