A World of Pursuit 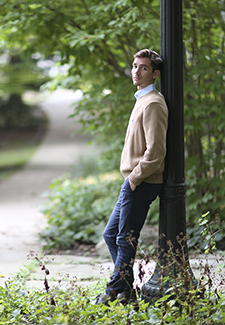 Everything was going great for the cross-country team.

Coach Tyler McCreary had joined the Redpack over the summer and senior leader Dom Patacsil started his season running only one second off the fastest time in the nation.

Then Patacsil got injured. All he could do the entire season was watch.

The team pushed through, finished fourth in the NCAC, and Sam Henthorn ’20, John Kirts ’20, and Joe Deiser ’21 earned All-Conference honors. But what Patacsil learned on the sidelines may serve him better in the long run than a victorious season.

“When you’re injured it’s so easy to pity yourself into oblivion, and when I found myself doing that, I took solace in the guys on the team,” says Patacsil. “In a way I had been trapped in my own world of pursuit. I felt alone in my goals. Being injured taught me to invest my efforts in collaboration in the forward progress not just of myself, but of the team.

“As I am coming back I think about that—the people I represent, the men of the Redpack who are alongside me, my family and loved ones. I am not so alone.”