Wabash Will Always Be Home Alumni were welcomed home this weekend as Wabash College held its Homecoming Weekend, which ended Sept. 29.

The weekend opened Thursday with Chapel Sing, one of the College’s most cherished rites of passage in front of Pioneer Chapel. Members of the Class of 2022 were tested on their knowledge of the words to “Old Wabash,” arguably the nation’s longest fight song.

A Leadership Summit was held Friday, bringing together the leaders of the National Association of Wabash Men, the Parents Advisory Committee, and the Liberal Arts Plus initiatives, to meet, engage, strategize, and collaborate. 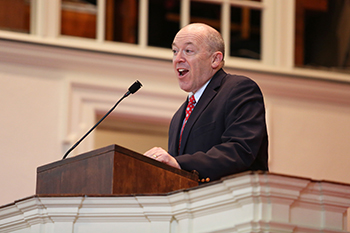 The annual Homecoming Alumni Chapel was held in Pioneer Chapel Saturday morning. President Gregory Hess greeted the alumni to what he says is “truly one of the greatest of all Wabash traditions.”

“Since the day you were rung in, Wabash has been your home. While years have passed, faces have changed, Wabash is and always will be your home.”

The Celebrating Leadership Lunch followed in Knowling Fieldhouse, where Trustee and Annual Fund Chair Greg Estell '85 thanked those in attendance for their continued support of Wabash College.

The Wabash College football team capped off an already great weekend with a 48-20 victory against Wooster in a packed Byron P. Hollett Little Giant Stadium.

The festivities concluded with the Glee Club's annual Homecoming Concert in the Fine Arts’ Salter Hall. The concert featured plenty of Glee Club favorites, including the beloved “Old Wabash” under the leadership of director Reed Spencer.