Wabash will induct six alumni and the 2002 Football Team into the College's Athletics Hall of Fame in a ceremony to be held Friday, September 28.

Slated for induction are Kurt Casper ’02 in football; Grant Comer '97 in swimming; Geoff Lambert '08 in track and field; Kevin McCarthy '12 in cross country and track and field; Mike Maddox '80 in baseball, Jeff McLochlin '83 in football (posthumous), and the 2002 football team. 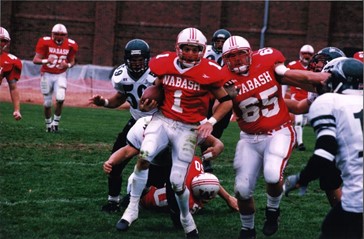 Casper is a four-year letterman and three-year starter and 2001 MVP for the Wabash football team. He finished his career with 205 receptions, 2,806 yards, and 27 touchdowns. Casper made “the catch” to win the 2001 Monon Bell Classic.

Comer is a three-time Most Valuable Swimmer and four-year letterman. He set the Wabash career scoring record with 1,790.5 points. He is a three-time All-American and one-time Honorable Mention All-American. He was inducted into Phi Beta Kappa and was an NCAA Postgraduate Scholarship recipient who captained the team in both his junior and senior seasons.

Lambert was a two-time All-American, running to seventh place in the Indoor 800 in 2006 and finishing as the national runner-up in the Indoor 800 in 2007. His second-place finish at nationals was Wabash’s highest place in 18 years. He won four straight NCAC Indoor Championships in the 800 meters, earning the 2007 NCAC Middle Distance Runner of the Year Award. He was the Track Team MVP in 2006 and 2008.

A four-year baseball letterman, Maddox was named American Baseball Coaches Association/Rawlings First Team All-American infielder in 1978. Maddox was 32-of-68 at the plate for a record-setting .471 batting average, which was third highest on the All-America team. Maddox was a two-time Most Valuable Player (1978 and 1980) under Coach Mike Deal. 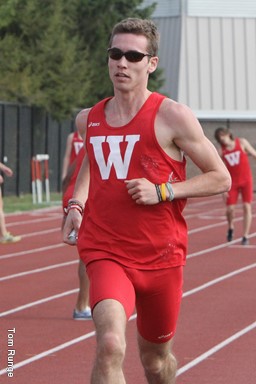 McLochlin started at linebacker as a freshman and would earn three varsity letters on teams that went 26-1-1, including the 10-0 team in 1982. He led the Little Giants in 1982 with 142 tackles and had 21 tackles in Wabash’s historic win over Dayton. He was named a Third Team All-American. McLochlin was killed by sniper fire while on patrol in Afghanistan in July 2006.

The 2002 football team was 10-0 in regular season. They held seven of 13 opponents to a touchdown or less (one shutout). The team advanced to the Final Eight of D-III tournament, losing to eventual champs Mount Union.

The Athletics Hall of Fame induction ceremony begins at 8 p.m. in the Knowling Fieldhouse in the Allen Athletics and Recreation Center. The ceremony is preceded by a reception and cash bar beginning at 6 p.m. with dinner at 6:45 p.m.

Registration for the event is available at www.wabash.edu/events/homecoming/. For more information regarding registration, contact Michele Ward at wardm@wabash.edu or 765-361-6369.