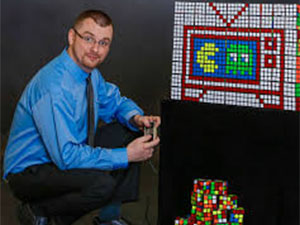 Penn and Teller have touted the craft and skill of Caleb Wiles on their show Penn and Teller Fool Us, while Linking Ring Magazine calls Wiles “a new star on the magic horizon!” A powerhouse entertainer, Wiles is unique to the magic world with his background as a mathematician; he has two bachelor degrees (Pure Mathematics and Secondary Mathematics Education) and a master’s degree in mathematics education. He exploits his understanding of the magical properties of mathematics to create poetic mysteries using Rubik’s Cubes and other everyday objects that astound audiences.

Wiles is a leader in the field and a highly respected creator of new magic effects. Vanishing Inc. Magic, one of the world’s largest online magic shops, launched its site by selling only two products and both were Wiles’s. He is a sought after lecturer and was a regular columnist for magic’s premier magazine. His original tricks are performed internationally by magicians of many cultures.