President Rings In Class of 2016 President Patrick E. White welcomed the men of the Wabash College Class of 2016 and their families, and charged the students to take their lives seriously and pursue with rigor their highest ambitions and dreams. 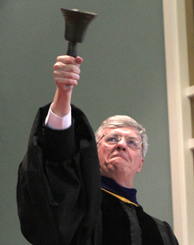 Over 260 men sat in the balcony of the Pioneer Chapel Saturday as the President issued his charge. Using the hand bell that once belonged to Wabash’s first teacher, Caleb Mills, Dr. White — quoting Shakespeare — rang in the class, which marks the official beginning of the students’ lives as Wabash men.

“If you are ready to take up this challenge — to take on the responsibility embedded in your dreams, to take on the care for your own lives and that of your brothers and all the men and women of Wabash; to set as your goal the wise, virtuous, and generous life embodied in the Gentleman’s Rule and the Wabash mission to think critically, act responsibly, lead effectively, and live humanely. If you are ready, stand with pride so that I might continue the tradition that harks back to the first professor of Wabash College, Caleb Mills, and using his bell, ring you into the company of Wabash men.”

And as he has done with each of the seven classes he has rung in, President White invited the students, who were seated in the balcony, to stand as he said, “I want to take a moment to introduce you to some of your greatest teachers: Please shake the hands of the men on your right and on your left; introduce yourselves. Yes, your fellow freshmen, these men of the Class of 2016, will be your teachers. The names you are hearing now, perhaps for the first time, will become ever more important to you as time goes on.”

In his remarks, the President encouraged the students to take responsibility for their lives at Wabash and seize the opportunities the College provides.

“I urge you, as I urge myself, to move ahead each day with confidence—even with courage—to learn, to grow, and to imagine new possibilities for yourself, your classmates, and now Wabash, your College,” said the President. 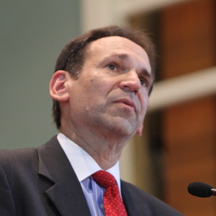 Dean of Admissions and Financial Aid Steve Klein served as emcee of the ceremony, and formally introduced the class using some impressive numbers.

“You found your way to Crawfordsville from 21 states and five foreign countries,” he said, “and more important than all of your luggage, you bring a wide range of religious, cultural, and racial backgrounds to this campus.

“I note this, not because it reads well in a college guide, but because it is an integral part of the Wabash experience. As we strive to best prepare you for an increasingly diverse society, the characteristics of our student body becomes an ever more important part of your education.”

Dean Klein explained that the College received over 1,500 applications for the Class of 2016 and just 260 students have the honor of standing tall as Wabash men. Among the freshmen are 52 legacies, including 21 whose fathers attended Wabash and 17 whose brothers are presently enrolled or have attended the College.

In keeping with tradition, Dean Klein reeled off some of the intriguing attributes of this year’s freshmen. “Being a Wabash man goes beyond academic achievement,” the Dean said. “It requires character, competitiveness, balance, a pioneering spirit, and a drive to impact society.”

There are 25 Eagle Scouts in the Class of 2016, 31 men who participated in Boys State, 55 student government officers, and 38 men who acted and performed in high school and community theaters.

A member of the Class of 2016 was a circus performer, another traveled internationally to Europe to play in an orchestra, and one man competes in equestrian events across the country (still another freshman trains race horses).

One Little Giant founded a sign language club, another worked as a television weather man, and a member of the class even modeled for Hollister.

The class includes a man who built an electrostatic ozone generator that purifies water, and another built a parabolic solar reflector that cooks hot dogs using only sunlight. At least one man has taken the Polar Bear Plunge, another has published a short story in an international literary review, and the class includes a decorated cadet commander for the Civil Air Patrol. 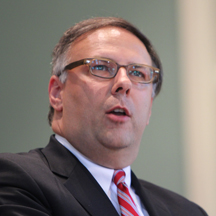 Greg Castanias ’87, the President of the National Association of Wabash Men, welcomed the students and their families to the Wabash community.

Castanias, an attorney and partner in the Washington office of Jones Day, described a bit of Wabash’s history and explained the College’s love of traditions. He also described attributes of all Wabash men.

“There are common threads that run through the Wabash man,” he said. “Wabash men are, above all, passionate. Our wives and partners often remind us that we are also probably more opinionated than we need to be, but sometimes, that’s just the price of being passionate about things.

“Wabash men are men of honor.  They stand up for what they believe to be right, even when that may be an unpopular view….

Castanias said the things that make up Wabash men and Wabash culture can be summed up in the motto, Scientiae et Virtuti. He recalled how his freshman advisor, the late English Professor Don Baker, explained that the motto called men to start thinking and deciding for themselves — to start making their own lives. He quoted Baker, saying, “That’s what the motto of the College implies. Scientiae et Virtuti. Knowledge and manhood. Know-how and guts. Wisdom and moral courage.”

“Simply put, the Wabash College culture will make you into a man,” said Castanias. “A good and learned man; a better man; the kind of man that the 21st century world needs lots of, and will surely have too few of.”

President White made sure the new students understood that it was their responsibility to share their time at Wabash with their families.

“Gentlemen of the Class of 2016, I urge you to share your experience with your family. Let them know what you are learning, how you are changing; let them be a good part of your experience here. They want to be a part of this adventure with you.”

And to the parents, he said, “You all will come to know and love this College as much as any alumnus because you, like an alumnus of the College, will see the good work of Wabash reflected in the growth and accomplishment of your son for the rest of his life.

“Remember too, and I mean this with all my heart, you have not lost a son, you have gained a college.”'

Watch the full "ringing in" ceremony: