While dozens of alumni representing six decades will return to Wabash College this weekend to celebrate the 40th anniversary of the founding of the Malcolm X Institute of Black Studies, the weekend will also be an opportunity to look forward to the Institute’s future. 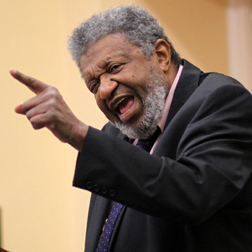 Founded during the 1970-71 school, the Malcolm X Institute of Black Studies was created to support Wabash’s students of color. It served as a refuge for the students, who felt racism on campus and in the community. Over time, the MXIBS evolved into a center of protest and action, developed an impressive speakers series, and created the longest-running community outreach program on campus, the KQ&K Mentoring Program.

“This weekend marks the culmination of a year of celebration for the founding and flourishing of the Malcolm X Institute of Black Studies on the Wabash College campus,” said Dr. Michael Brown, the new director of the MXIBS. “This is not only a time for the alumni to be proud of their accomplishments, but also for the current students and the College as a whole.”

Dr. Finley Campbell (pictured above) and Dr. Peter Frederick, to faculty members who were on campus at the time of the Institute’s founding, return this weekend to celebrate the past accomplishments of the Institute’s students and alumni. Both will be honored at a festive banquet Saturday night, and Dr. Frederick will be named an honorary alumnus by the National Association of Wabash Men.

The weekend is filled with colloquia sessions, social events, panel discussions, and workshops. Many alumni will also participate in a video history project to document not only the early days of the MXIBS, but its presence over time. 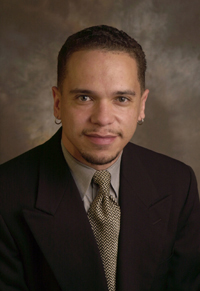 “Very few institutions like the Malcolm X Institute have survived, especially in the current economic environment, and to have the Institute at Wabash be in a position of growth is a credit to the entire campus community,” said Dr. Brown. “As director, I look forward to working with alumni and students to forge a broader future for the MXI, building upon a strong foundation of meaningful work. This is a weekend of both celebration and retooling for the future.”

The weekend includes a Friday afternoon session devoted to career development opportunities with students. Alumni Lemuel Stigler ’73, Eugene Anderson ’83, Kenyatta Brame ’92, and David Woessner ’01 will share their insights with students about how to set career goals and how to make the most of the opportunities Wabash provides.

After Saturday morning’s session with President White and the deans, alumnus Garrard McClendon ’88 will facilitate a conversation about student experiences and developing relationships with alumni.

Saturday night’s celebratory banquet will include recognition of the founders of the MXIBS, comments by President White and Dr. Campbell, and honoring past Institute chairmen.

Sunday’s events will include a spiritual service followed by a meeting of MXIBS alumni, facilitated by Keith Nelson ’71, about the future of the Institute and the role of alumni.