Theater Professor Michael Abbott has drawn a lot of attention to his blog about the gaming world – The Brainy Gamer, but he never imagined the kind of attention he’s getting now by bringing gaming into the Wabash classroom.

During discussions about the new all-college course for freshmen, “Enduring Questions,” Abbott suggested one of the readings might be Erving Goffman’s “Presentation of Self in Everyday Life” and how the book is reflected in the video game Portal. 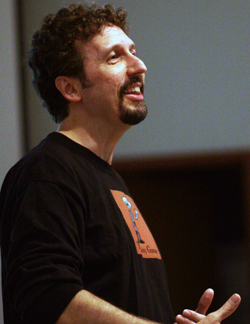 “I pitched the idea to my colleagues on the committee (decidedly not a collection of gamers), and they agreed to try Portal and read selections from Goffman's book,” Abbott explained on his blog.
“After plowing through some installation issues ("What does this Steam do? Will it expose me to viruses?"), we enjoyed the first meaningful discussion about a video game I've ever had with a group of colleagues across disciplines. They got it. They made the connections, and they enjoyed the game. Most importantly, they saw how Portal could provoke thoughtful reflection and vigorous conversation on questions germane to the course.”
But with the start of the new school year, the news Portal was going to be used in a college classroom went viral in the internet world. “It’s just crazy isn’t it,” Abbott said. “I’m very grateful Brainy Gamer has gotten a fair amount of attention but this has just spiked.”
The blog entry on Brainy Gamer announcing the project has drawn more than 80 responses.
Abbott explains he is using Goffman and Portal as part of an “instructor’s choice” of text for part of the class. But his 15 students will not be the only ones playing portal. Abbott expects several colleagues to join in the experiment.
The theater professor has been concerned though because many of the web news stories and blog posts have overstated the plan a bit in their reporting. Not all freshmen will be playing the game and reading the text. It will be a handful of the first-year students in the sections led by professors joining Abbott’s academic experiment.
"Transmedia and new media are already increasingly important to us," Abbott said. The theater professor suggested such classes keep the curriculum, faculty members, and the College better connected to the changing world.
Here are links to just a few of the sites talking about Portal and Mike Abbott's Brainy Gamer blog:
Gamespot
GeekGLOSS
Wired News
Game Life
Gamer Crave
Kotaku Blog
Joystiq
... and many others!