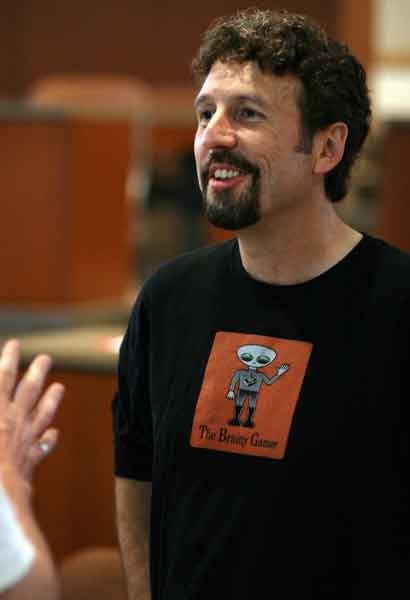 Abbott’s The Brainy Gamer Web site has been buzzing with proof of such engagement for more than a year (and a half-million hits).

The 2000 winner of the College’s top award for teaching, Abbott built the site—a blog and international forum for “thoughtful discussion” on narrative video games—in August 2007 as part of his sabbatical research. He was inspired by his experience teaching a Wabash freshman tutorial called The Art and History of Electronic Gaming.

"In that class, I encountered the most impassioned and thoughtful discussions, the best examples of creative and critical thinking, and the finest papers I’ve read in all my years teaching," Abbott says.

During his sabbatical he interviewed educator Professor James Gee, author of What Video Games Have to Teach us About Learning and Literacy. Gee writes that "21st-century learning must be about understanding complex systems," and "that's what games at their best can do. The passive spectator gains insight by getting involved."

He also introduced Abbott to the phrase "passion communities," which Gee calls "an alternative learning system that teaches better than most schools."

The Brainy Gamer has become such a community, with more than 515,000 hits and 3,200 comments on the subjects Abbott has introduced there (Editor's Note: This article was originally published in Fall 2008. The Brainy Gamer has since surpassed 10,000 comments). He says the way members of that community respectfully and knowledgeably discuss even the most controversial issues could be a model not only for how Wabash students interact in virtual communities, but in face-to-face learning communities, as well.

So Abbott finds studies being done on the civic impact of gaming "especially interesting."

"Much work is being done in this area," Abbott says, "with results that contradict commonly-held assumptions."

Enter the Pew Internet/MacArthur Foundation report "Teens, Video Games, and Civics" released September 16, which shatters the stereotype of gamers as "socially isolated and distracted from the broader society."

"Teens who frequently play video games are just as likely as those who play infrequently to be civically and politically engaged—to volunteer, give money to charity, try and convince someone to vote, express interest in politics, commit to improving their communities, and to take part in protests and demonstrations,” Mills College Professor Joe Krahne reports on a MacArthur Foundation Web site.

“When we asked teens whether they had ‘civic gaming experiences’ such as helping or guiding other players, thinking about moral and ethical issues, and learning about social issues, we found that teens who frequently had these experiences were much more likely to be civically and politically engaged—to raise money for charity, to be interested in politics, etc."

Discussions on The Brainy Gamer are already contributing to this rapidly growing area of study.

(Originally published in Wabash Magazine, Fall 2008) Professor Abbott is also writing about his experiences as The Brainy Gamer for the Fall 2010 Wabash Magazine.)

Read more about Professor Abbott's work with the Center of Inquiry at Wabash here.