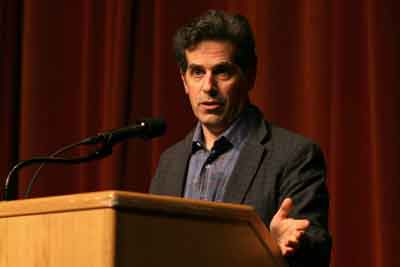 Hours before his public reading Monday evening at Wabash College, the author Salon.com calls "the foremost novelist writing in America today" was meeting with 18 students in the living room of the College’s Caleb Mills house.

“I have this character who expresses opinions very different from my own,” one of the student writers said. “A friend of mine read my story and suggested I change it. He said readers would think the opinions were mine.”

“What do you think?” asked Jonathan Lethem, whose Motherless Brooklyn won the National Book Critics Circle Award for fiction, and whose work earned a 2005 MacArthur Fellowship, often termed “the genius grant.”

“The character is complex, his opinions aren’t mine, but that’s who he is,” the student said, still somewhat uncertain.

“That instinct is right; you were right,” said Lethem, the only novelist named one of Newsweek magazine's “100 People for the New Century.” “If I only wrote characters who shared my opinions, I wouldn’t have characters that interest me enough to write. Expressiveness requires discomfort, a willingness for me, as a writer, to be uncomfortable, and the reader, as well.”

It was one of many lessons aspiring writers took away from their hour-plus conversation with Lethem, who arrived on campus Monday afternoon as this year’s Will Hays, Jr. Visiting Writer.

See a photo album from Lethem's visit here.
Monday evening in the College’s Ball Theater, Lethem told the Wabash community the story of his unconventional journey from aspiring painter to acclaimed writer.
Professor of English Tobey Herzog opened the event with a tribute to the late Ginny Hays H’98, wife of Will Hays, Jr. who was “an enthusiastic patron and participant in the Hays Visiting Writer series, and, like Will, an inspired storyteller.”

“We miss her presence, spirit, and vocal support, and we’re grateful she graced the lives of so many people at Wabash and in Crawfordsville.”

“Jonathan Lethem’s works are distinguished by memorable characters and his love of language,” said Assistant Professor of English Eric Freeze, who coordinated Lethem’s visit and introduced the writer. “He leads us into the tangle of words, and always finds his way out.”

Lethem is the son of painter Richard Lethem, whose painting, he once wrote, "taught me to think."
He described his mother as a “wonderful presence” and “a social dervish” who “wrote without being a writer" and "could draw a sense of meaning out of thin air.” The novelist grew up in Brooklyn in the 1960s and 70s in a neighborhood “all but abandoned by the white middle class” and full of people “who were absolutely fascinating to me.

“It was defiantly mixed,” Lethem said. “There were artists, old sailors, eccentric renovators, radicals, and hippies attempting to create communes where decisions were made by smoking, hairy people sitting around a kitchen table."

Lethem’s family invited painters, union organizers, and others to stay with them, and his mother nurtured her son’s love of reading.

“The turning point book for me, my graduation day from children’s books, was Lewis Carroll’s Alice’s Adventures in Wonderland and Through the Looking Glass, which Mom read to me. That’s when I first began to realize, this isn’t just a story; someone thought this up. I began to identify with the invisible author.”

His mother guided him to science fiction, where he encountered writers who influence him today, but Lethem had already decided to become a painter, like his father. He attended New York’s High School of Music and Art and studied painting while much of his free time reading.

“To become any kind of a writer, you have to have a period of reading almost obsessively.  I read all of Kurt Vonnegut’s books in three weeks. There was a time in high school when I read one novel per day—I filleted a book like a fish. I was more inclined to storytelling than painting, something I both knew yet didn’t know in those days.”

He wrote a few stories in high school, but it wasn’t until he attended Bennington College that he “fell in love with the idea of being a writer.”

“They wanted me to start all over as a painter, and I was arrogantly impatient with taking beginning classes,” Lethem said. But the Bennington writing program had “a crazy energy” and talented students, some already published.

“I didn’t know anything about telling a story, but I drew a lot of energy from this.”

He also had “a complicated relationship” with his first foray into a private school.

“Being Bohemians, a part of this counterculture, concealed class differences and the fact that my family was poor,” said Lethem. Many of his classmates at Bennington were “inordinately privileged.” 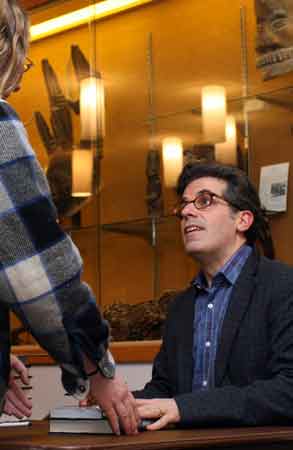 Energized by his fellow writers at Bennington, he nevertheless exiled himself from the college community, embodying “the values of my Bohemian upbringing against this place and working the margins of the school, ultimately deciding: I’m going to be a novelist; let’s get the hell out of here.”
He moved to Northern California, worked in used bookstores at night and wrote by day.

“I formed a writer’s group and constructed a “graduate” program for myself, finding peers I could learn from, lots of examples of what I wanted to do.”

His first novel was published on the day Lethem turned 30, but it wasn’t until he moved back to Brooklyn, where he now lives just four doors down from the home he grew up in, that his work truly flourished.

“I had no idea what that would open up to me. I was talking about the real places of Brooklyn, this whole sublimated part of my sensibility returned to me. I was old enough to admit I was rooted in a place, that this place had a language, and that language allowed me to know more about myself and the world than I’d ever experienced.”

Lethem’s first two books written there, Motherless Brooklyn and Fortress of Solitude, earned critical acclaim, but he calls his latest novel, Chronic City, the “culmination of my work” to date.

Lethem noted that earlier on Monday, Professor Freeze offered the opinion that the author’s work “is always about an absence or a loss.”

“Eric reads my work with almost disturbing insight,” Lethem said. He insisted, though, that the death of his mother from cancer when he was 14 was not the source of this recurring theme of loss in his work. “Even at that age, I already had a profound suspicion that the things you depend on will be taken away,” Lethem said. “Mom’s death simply confirmed it.”

Chronic City brings that profound suspicion to bear on the city in which Lethem grew up. The results, an Esquire magazine reviewer writes, “makes you ache for a city long gone.”
Professor Freeze believes Lethem’s visit, particularly the author’s open and forthcoming approach with students, may have accomplished much in a short time for the College’s writing program:

“For emerging writers, Jonathan Lethem's visit provided an alternate road map to publication with some signposts in common with the conventional MFA [master of fine arts]/academic route. Lethem emphasized hard work, revision, mentoring, and voracious reading as characteristic of his development as a writer.

“I think Lethem wanted our students to value their education and see the advantages that they have to share manuscripts with their peers, get feedback from published writers, and go to events and readings on campus: all things that Lethem had to construct for himself as an independent bookseller and itinerant academic.”

No doubt the Wabash student Lethem talked with in the Caleb Mills house about developing characters already values the feedback he got from this acclaimed and generous author, words that may echo in his mind for years: “Your instinct is right; you were right. Expressiveness requires discomfort.”