Wabash Day Has Impact Across Country

Approximately 300 Wabash graduates along with their families and friends gathered in small groups across the nation October 3-4 and worked to better their communities as part of the fifth-annual W.A.B.A.S.H. Day.

The variety of projects and impact illustrated Wabash Alumni Benefiting And Serving Humanity. This fall brought new projects and projects continuing in their fifth year.

Closest to campus, members of Wabash’s Theta Delta Chi fraternity and Jim Amidon ’87 helped coordinate a Breast Cancer Walk that collected more than $32,000. More than 250 people turned out for the event.
“This was definitely different than most WABASH Day events,” Amidon said. “When we were approached about hosting the Making Strides Walk, we were able to lock in October 3 so that it could be our signature local WABASH Day event. Now we’re hoping to make it an annual tradition.”
Josh Robinson ’97 put together a Wabash Day project in Boston. The first-ever effort brought 11 Wabash men to the Franciscan Hospital for children. Alums visited children in two residential units while playing board games, creating art, and sharing a pizza party. (Group photo on homepage!)
Wabash Day is a coast-to-coast operation. In Seattle, Andrew Naugle ’98 organized a group of alums to work at the Ryther Child Center where Lee Grogg ’68 works as executive director. A half dozen Wabash men helped Ryther by painting an indoor playroom and completing some yard work.
Back in Indiana, Rob Paugh ’92 put together a trail cleanup project in Westfield and had a really big turnout. He had more than 20 people in attendance, mostly graduates, along with a local Brownie troop.
“Thank you so much for organizing the great group of volunteers for Westfield’s Wabash Day,” Westfield Parks Director Melody Jones wrote to Paugh. “They worked so hard and we got so much accomplished. Please express my thanks to all that participated.”
Matt Ripley ’06 didn’t have a large alumni base in Bowling Green, KY, to work with but found Mike Heighway ’08 and together they helped out at a local library.
Another first-time project was food distribution in Fort Wayne, IN. John Powell ’79 put a group together that helped distribute food to about 500 people. 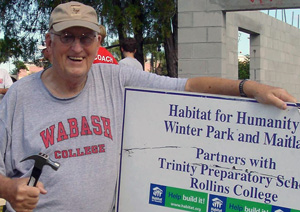 Wabash Day's reputation has grown far and wide. Former Wabash College President Thaddeus Seymour didn't want to be left out in Florida. So when he headed out Saturday to work on a local Habitat for Humanity project he put on his Wabash tshirt.
"I was so pleased and proud to read about W.A.B.A.S.H. Day, remembering Jon Pactor well as an undergraduate (forty years ago!) and admiring his (and his son's) continuing loyalty and service to Wabash over the years," Seymour wrote. "Wabash Day is a great idea and a practical expression of the liberal arts in action. The message came through loud and clear here in Florida, so I wore my Wabash shirt to our Habitat work site last Saturday. We are building our 46th house here in Winter Park."

Indianapolis always has several projects. Check out the photo of the alums preparing meals for Second Helpings on the alumni homepage.