Quentin Dodd is a Wabash College network administrator by day but novelist in his free time. His off-beat books Beatnit Rutabas From Beyond the Stars and The Princess of Neptune gained him recognition in the field of juvenile fiction.

His latest work “Zorg and Andy,” has been made into a film which was partially filmed on the Wabash College campus. The movie even features a few familiar Wabash faces. 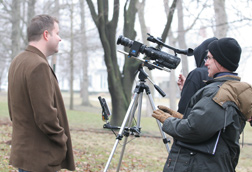 Dodd’s big moment arrives Saturday in Shelbyville, Indiana, when the movie will make its world premiere. “Zorg and Andy” is just one film on the list on Tromadance Indiana which runs Friday through Sunday in Shelbyville’s historic Strand Theatre.

Admission is free and no fees were charged to the filmmakers to participate in the festival.

“This was the first movie I've worked on in a production capacity, and it was surprising to see how much the story changes as it goes from words on paper to an actual film.” Dodd said. ”Everybody — the actors, the editor, the guy who made the props — puts their interpretation into it and we end up with something that we didn't quite expect. I mean that in a good way, though. It's the unpredictability that makes it exciting. And terrifying. But mostly exciting.”

The movie has a definite Wabash flavor with Trevor Fanning '00, Marco Noyola '96, and Nick
Kraynak in the cast. (Noyola was also the production designer.)

Guy Davis, the director, is a former Wabash employee. There were a number of Wabash students and employees as "background artists," too, including  Application Developer Mark Siegel and English Professor Tom Campbell as loincloth-wearing cultists!

“I'm very proud of the post-production work,” Dodd said. “Guy Davis, the director, spent a lot of time working on sound, color, and editing in post-production, and he did a great job. They're the kind of things that no one notices if they're done right, but they can cause a lot of problems if you don't take care of them. I'm still traumatized about losing some of our best jokes in the editing room, but that's the way it goes. A merciless editor is a movie's best friend.”

The film was shot, in part, at Wabash during Spring of 2006. Now that the film is about to be screened, Dodd is feeling the anticipation.

“I'll probably be a nervous wreck during the actual screening,” he admitted. “There's a good chance I'll spend most of the time looking around and thinking things like, ‘Is anybody laughing? Are they laughing in the right places? Are they laughing enough?’"

And if you can’t make it to Shelbyville Saturday afternoon, Dodd will have DVD copies for sale.

“We just got our first batch of DVDs from the DVD factory, so they should be available soon, both through the website and from the trunk of my car.”