The International Hall of Detchon truly became a hall of internationals when a group of Brazilians descended on campus for a brief visit to share with and learn from Wabash College students.

In conjunction with IU Law Professor Tom Wilson ’77, the Modern Languages and Prelaw departments collaborated to bring a group of Brazilian lawyers, law professors, and law students from FAESA (University of Espírito Santo) to campus. 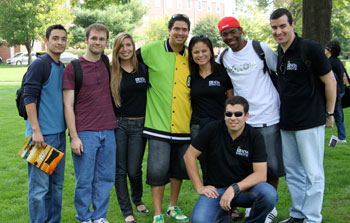 The group visited the inaugural Portuguese course, toured campus, and presented “The View from Brazil” to a packed International Hall on topics including environmental, criminal, and family law. Wabash students were given the opportunity to ask questions and interact with the group after the presentation during a reception.
“This was a wonderful opportunity for pre-law students to understand early the importance of international law and international relations,” said Prelaw Committee Chair Professor Scott Himsel ’85 who worked closely with Wilson on the project.
“And the timing was perfect because as far as we can tell, this is the first time Portuguese has been offered at Wabash,” said Modern Languages Chair Professor Dan Rogers. The eight students in the inaugural class spent their class time interacting with the group from FAESA, listening to Portuguese conversation, and practicing their own Portuguese. 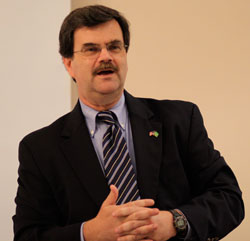 Wabash students took full advantage of the opportunity to learn about Brazil and the Brazilian court system. They asked questions about the differences in court systems and due process of law between the two countries and even referred to specific cases involving Brazil and the US. Questions about Brazil ranged from sports to the indigenous populations of the country.
The students and faculty from FAESA also took advantage of the opportunity to learn about Wabash students and traditions. During their campus tour they listened intently about traditions, spoke with many students, and snapped photos of everyone they met.
“What makes this place so special is the opportunities the students get, (to meet and interact with a wide range of people)” said Wilson. “Here you are seeing the Wabash alumni connection in action.”
Photos: above right: Students from Wabash and Brazil pose on the Mall, left: Tom Wilson '77 introduces the group from FAESA before their presentation.