Sometimes the biggest impacts happen in your neighborhood.

Spearheaded by Amber Reed and a staff of six, the MCHD went through a four-year process of assessing, planning, implementation, and confirmation with a myriad of community partners that made the effort possible.

Reed’s secret weapon might have been the assistance provided by Wabash College and the Global Health Initiative. Luke Wren ’14 was the MCHD’s first accreditation coordinator and helped start the process. Further, the GHI supplied 25 semester or summer interns who proved essential along the way. 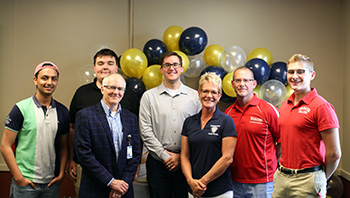 “Wow, if you want to talk about something that you cannot measure, I think it’s the value they have brought to us,” said Reed, the MCHD Administrator. “They have very different skill sets when they come, whether it’s data analysis, marketing, or something else. These guys come in, they are so smart, and they stay on task. We could not have done it without them.”

The MCHD utilizes those skill sets to plug interns in where they can help most in the community. For example, if there is an interest in mental health, there are action items that relate directly to that. If a student has expertise in data management, those skills will be put to use as well. Throughout the process, GHI interns have served as scribes and researchers and written reports.

“They have been more than helpful,” said Samantha Cravens, MCHD Health Educator and Accreditation Coordinator. “Most of the products they are creating are applicable. They are real. It’s not just busy work for the interns and it’s been great having them here.”

For the interns themselves, there is a learning curve, as they adjust to responsibilities that might have been beyond their ideas of public health.

“All I knew about public health was immunizations and awareness,” said Spandan Joshi ’22. “When you actually work here, we are out there setting up traps for mosquitos, tracking statistics, it’s crazy. That’s just a small part of what we are doing here. We are building relationships with community members.”

Another GHI intern, William Borland ’22, was energized by the first rule of public health: everyone wears multiple hats. That realization has also broadened his understanding of the connections between the College and the county.

“Now that I’ve been in the program, you learn so much and there is so much more,” he said. “Everybody has two or three jobs, pulling multiple strings, and it seems like the public health department holds the county together. I used to think that Wabash was our little place. Now, we’ve been on the back roads and been up and down the county. We learned the county and the people.”

Those reactions to the work represent a big step in the understanding of the role of public health on a larger scale. Cravens appreciates such growth.

“They are a little shocked with some of it, especially when it comes to the environmental health inspections we do, the boots-on-the-ground work,” she said. “A lot of them come out a little more empathetic in learning how to see things through the lens of public health, and not just individual need.”

Even as GHI interns continue to impact the MCHD today, Reed thought back over a few of the noteworthy contributions from Wren to Bilal Jawed ’17, Artie Equihua ’20, and lingered on the efforts of Matt Hodges ’19.

While interning with the MCHD last year, Hodges took a health equity report that Wren had originally written and turned it into a bigger, better, more robust document that proved essential to the accreditation process.

“We basically gave him what we had and said this is what we need and Matt just did it,” Reed said. “He was able to cross analyze, compare, and pull other data,” Reed said. “There is no one in our department who could have done what he did. It speaks to his work ethic, his mind, and the capability that he has to see a much bigger picture. He’s served this community very, very well.”

Wren looks back on the four-year process with pride toward the relationship that Wabash has forged with the MCHD.

“We are a part of the larger community that includes Wabash College and Montgomery County,” he said. “Connections like this that bring students from rural Indiana, as well as cities, and other states, show this is what a small college can do with a local organization to improve the health of a community. It’s really great.”