44th OLAB Ends with a Twist

The 44th edition of Opportunities to Learn About Business at Wabash College came to an end Saturday when 43 students were honored for completing the challenging program.

“We had a great week this year, and I really enjoyed working with the counselors and students,” said program director Jim Amidon. “While as a whole they were a quiet bunch, the Labbies were also smart, focused, and seemed to enjoy tackling all the work we threw their way.”

The students, who came to the Wabash campus from 13 states, were immersed in all aspects of business for a week, and learned — among other things — about production, finance, accounting, the stock market, group decision-making, public speaking, marketing, and advertising.

Competing in a computer simulated game, the students formed 10 cell phone companies. Each team was to identify a target market and design a product and marketing strategy to sell their products in a very crowded market. 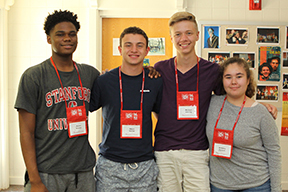 Curve had sales approaching $14 million in the final quarter, some $61 million in sales for the game, and concluded the simulation with more nearly $11 million in total retained earnings and in excess of $29 million in assets. Team 5’s Retained Earnings lead was the largest in OLAB history.

Team 9, Jolie, won the Tobey Award for developing the most focused and effective advertising campaign. Priya Aggarwal (Orange, CT), Dominic Rossi (Zionsville, IN), Sam Seneker (Joliet, IL), and Makenzie Wolz (Westminster, CO) created a brilliant campaign to sell The Concierge, a phone that fully integrates all social media into a single feed. And for those particularly vain social media users, the phone also features a high definition mirror so “users can always look their best.” 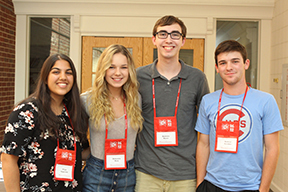 Ten chief marketing officers took center stage Wednesday evening. The CMOs, armed with nearly a dozen hours of lectures, games, and workshops related to marketing, presented their marketing strategies to two pairs of judges. Changes to scheduling led to more interactive conversations, which allowed judges to workshop ideas with the CMOs and their C-Suite colleagues.

Bringing home the Bingo Marketing Awards were Ishaan Sandhir (Dayton, OH) of Team 1 and Lizzy Kovach (Peoria, AZ) of Team 10. Amidon, who joined three other judges, commented that Sandhir can likely skip college and get a marketing job tomorrow.

Lilly Springer (Indianapolis, IN) swept the two speaking awards — taking top honors for Best Introductory Speech and she was elected by her peers as OLAB’s Commencement Speaker.

The Labbies also had to create stockholders’ speeches at the end of the week for Speeches Director, Professor Todd McDorman. They were charged to give an eight-minute talk wrapping up the week’s ups and downs, and focusing on the positive aspects — even when things didn’t work out as planned. Winning the coveted Bull Thrower Award was Jackson Holforty (Carmel, IN) in a year when Professor McDorman said there could have been as many as four winners.

Counselors selected Shelby Gray (West Lafayette, IN) as Ms. Labbie and Josef Eisgruber (Indianapolis) as Mr. Labbie for their all-around efforts to get the very most out of the program.

The majority of funding for the OLAB program comes from a long-time partner, the Goodrich Trust. OLAB also receives significant funding from the Scientech Club, Carmel Rotary Club, and the Indiana Sports Corporation.