Wabash College Dean and Professor of Chemistry Scott Feller was awarded a National Science Foundation (NSF) grant to study a protein involved in the initial steps of vision.

The five-year, $511,500 grant covers the research work for Feller and students as they examine the effect of lipids containing polyunsaturated omega-3 fatty acids on the membrane-protein interface. Receipt of this grant ensures 22 years of continuous NSF support for this project, which coincides with Feller’s arrival on campus in 1998.

The study focuses largely on a protein, Rhodopsin, which is found in the retina of your eye. It is the protein that absorbs the photon of light, the first step in vision. The research attempts to understand how the vision process is influenced by the cellular membrane and, in particular, the role of omega-3 fatty acids.

“Omega-3 fatty acids are found in high concentrations in your retina, basically the highest concentrations found in the human body are found there. We’re interested as to why that is,” said Feller. “There are broader scientific implications because this protein is a member of a very large class of proteins that have similar structures. If we understood Rhodopsin, we would understand something about a class of proteins that are very important pharmacologically.” 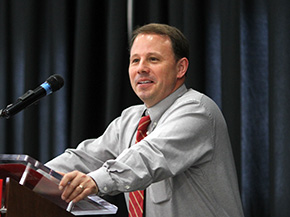 The second part of this NSF funding is the impact on student education, as the grant will support three student interns each year. The support not only covers work and new equipment in laboratories, but also allows for those students to travel to professional meetings and conferences.

In addition to Wabash students, the research program also includes collaboration with a handful of researchers off campus.

The continuation of Feller’s work, this project titled, “Atomic Modelling of Membrane Proteins,” enables him to maintain both scholarship and teaching while handling the responsibilities of the Dean of the College. To date, the research has produced more than 50 peer-reviewed publications.

“I think it’s important for the Dean of the College to be engaged with his or her discipline because we are asking faculty members to do the same thing,” Feller said. “They have many teaching and service responsibilities on this campus, but we still ask faculty to remain active in their disciplines and to continue to make contributions so that they are actively engaged. I don’t see it differently for me.”

Much of Feller’s research is in computer modeling, so he feels fortunate to receive extended funding and to work closely with scientists throughout the field.

“It was a huge relief to receive this type of extended funding, especially given the tight funding of the last decade,” Feller said. “I have ridden the increasing power and decreasing cost of computers over the last few decades, which has worked very well. I’ve have a lot of really good collaborators – both students at Wabash and professionals off campus.”

This grant will fund research through May 2020.