What a difference a week makes.

Seven days after a sluggish first half cost the squad dearly against Wittenburg, the Wabash passing game struck DePauw early and often Saturday, as the Little Giants raced to a 21-0 first-quarter lead and never looked back in winning the 120th Monon Bell Game, 38-21. 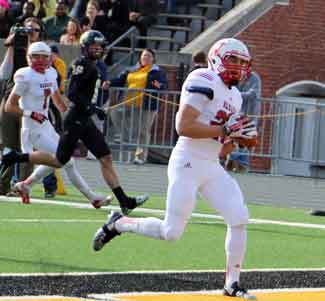 “Obviously, the first half we were sharp with the passing game,” said Wabash head coach Erik Raeburn.  “We thought that would be key – that DePauw would crowd the line of scrimmage and try to outnumber us in the box – so we felt that we had to pass it.”

Pass it the Little Giants did, as sophomore quarterback Michael Putko connected on 11 of 14 attempts in the opening half for 191 yards and three touchdowns.  He finished the contest with 21 completions in 29 attempts for 296 yards and those three TDs.

“It was important to get on them and get a lead so we could get comfortable with things,” Putko said.

After Sean Hildebrand’s 10-yard run opened the scoring just five minutes into the game, he and fellow receivers Jon Laird and James Kraus each added three scoring receptions to give Wabash an insurmountable 28-0 advantage

“The coaches put a lot of trust in the receivers today,” Hildebrand said. “Guys like Jon Laird, James Kraus, and Drake Christen — just a freshman playing in his first Bell game — all stepped up and played a phenomenal game.”

That trust was rewarded with a number of big plays, each exploiting DePauw’s aggressive defensive tendencies. 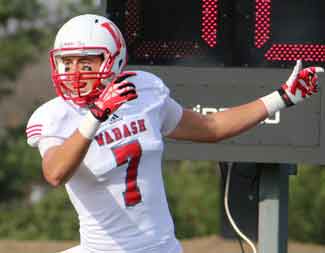 The first, a 64-yard strike to Laird with 5:01 to go in the first quarter, came on a simple wheel route run behind a bubble screen set up as a decoy.  If the safety goes for the decoy, the ball goes outside to Laird.  If the defender doesn’t, the quarterback throws it to the other receiver.

“The safety jumped the curl and I ran right by him,” Laird explained.  “We had a feeling it might work.  We ran a bubble the series before and we saw a coverage we thought we could exploit that play and it worked out pretty well.”

The second, a 26-yard pass to Hildebrand with 52 ticks remaining in the opening period, came after the Little Giants used the same bubble screen with success earlier in the drive.

This time, Putko would pump fake another bubble-screen throw sensing the advantage and try to sneak Hildebrand behind the defense.  It, too, worked without a hitch.

“We ran bubble the entire way down the field and it was working,” Hildebrand said. “The coaches knew their defensive backs would bite hard on the bubble, so we pump faked and Putko made a great throw. It was easy for me.”

Raeburn couldn’t have asked for things to go more smoothly.

“I thought Michael played really well,” he said.  “The receivers were running great routes, so that was huge for us to get off to a good start.”

The strong aerial start by the Little Giants dealt a crushing blow to the in-state rivals.

“It hit them hard,” Laird said.  “We rely on the run game here.  We have great receivers who block very well, but we can also catch the ball.  It seemed like we scored on just about every series in the first half. It set the tone early and that’s how you win ball games.

That early effort put a nice cap on the regular season and sent the second straight Wabash senior class into history with a spotless 4-0 record vs. DePauw.