The Wabash College Class of 2012 enjoyed the ringing echo of Caleb Mills’ bell all across the College Mall — the same bell that called them to be Wabash men four years ago — when President Patrick E. White rang out the class on Commencement Sunday.

One hundred eighty-seven men received sheepskin diplomas on the campus Mall in the shadow of the Pioneer Chapel on Mother’s Day — and each graduate was presented a red rose to honor their mothers.

You can watch the entire Commencement Ceremony on the Wabash College YouTube page. You may also make a gift to the Annual Fund in honor of the Class of 2012 on the Annual Fund Page. 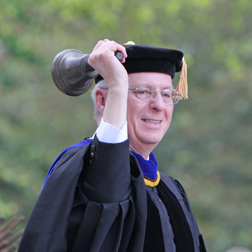 With the sun shining brightly on the graduates and more than 1,000 members of their families, President White thanked the class for its leadership, in good times and bad, and for serving as teachers to one another and to him.

“I thank you for all you have taught me,” the President said. “Thank you for your leadership, your commitment to the College, and your teaching of one another and all of the underclassmen. You have served as mentors and brothers to those younger — and older — than you at Wabash.

The President acknowledged that the seniors had persevered through the worst economic conditions in generations, and struggled through intimate and often difficult conversations about what it means to be a Gentleman in the Wabash context.

“Sometimes, like brothers, we have disagreed. Sometimes we have struggled to listen carefully to one another. But we have always come together in our love of and loyalty for Wabash — and in our trust in one another,” President White said.

But in keeping with tradition, the President's remarks were brief. Two graduates, Yangnan Liu and Donovan Bisbee, were the featured speakers. While their topics were different, both spoke fondly of the relationships they formed with their teachers and their classmates. 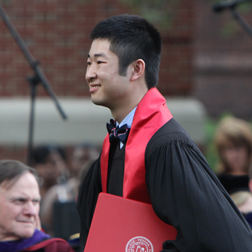 Yangnan Liu, a native of Chendu, China, told his classmates about the transition he made when coming to a college in a town he had never visited, and having to re-define his notion of what and where “home” is. Growing up, he always felt like his home was his family dinner table, where each night at 6 p.m. he sat with his parents for the evening meal. All that changed four years ago when he arrived at Wabash.

“Home is no longer a dinner table; it is when your loved ones surround you and cheer for you,” Liu said. “Home is not just a TV screen, it is a group of life-long friends painting the senior bench together on a rainy night. Home is not where you are originally from, it could be anywhere you are welcomed, accepted, and trusted. It is not a single-family unit, it is a community that you care about, contribute to and remember.

“Our home, Wabash, isn’t just a temporary living shelter; it is a permanent feeling that encourages us to remember the precious moments and come back to re-energize ourselves to go even farther,” added Liu. “No matter where we wake up on Monday, the feeling of home at Wabash will never go away.”

In closing, Liu — an art and economics double major — challenged his Wabash brothers to go fearlessly into the future, and to find homes wherever they live.

“As we move forward to new destinations, many of us will face the same questions we had four years ago: Who am I again? Where is my home today? And who is my family now. But don’t be afraid my brothers, after all we all have been through, home could be anywhere. So    please allow yourself to embrace the new environment, discover other cultures, and find a community — a group of people that will love you, care about you, and cheer for you.” 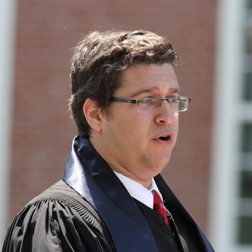 Donovan Bisbee, a native of Ridgefield, Washington, was reluctant to give a speech filled with wisdom and advice, so he took a different approach.

“I speak to you today as I am, just one more college graduate who is terrified of the world out there, concerned that I’ll make a mistake, and somewhat reluctant to leave this place,” Bisbee said. “I offer the following lessons, which Wabash has taught me. My fellow seniors let us follow in the path of that educational icon Bill Nye the Science Guy and consider the following. Live Passionately, Laugh Openly, and let go.”

Bisbee paid tribute to his professors for their academic passions and for teaching him to laugh at himself. He urged his classmates to let go — to let go of preconceptions and let go the idea that every Wabash graduate will succeed in business, law, and medicine.

“Fellow seniors,” he said, “many of us are going to spend the next few years looking for work, with varying levels of success, and many of us will be living back at home and working dead end jobs to make the interest payments on our student loans. This is just the way life works.

“[Wabash] taught me, and I hope many of you, the importance of doing three things. Living passionately, so that we might find something which gives our lives meaning and makes it worth waking up in the morning; laughing openly, that we may not take ourselves too seriously and live in a world which is never devoid of laughter and merriment; and letting go, that we might not declare ourselves lost before we even have the chance to be found.

“Men of the Class of 2012, so long as we strive to live passionately, laugh openly, and let go… we can hope for the life which Dr. Placher envisioned 42 years ago: one where we see that there is more to admire in men than despise, act more honorably than we expected, and have a lot of fun along the way.” 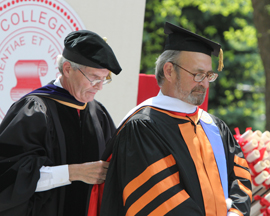 Dr. Miller, who majored in Greek and served as president of Phi Kappa Psi and Alpha Phi Omega, received his Ph.D. from Princeton University and spent his career on the faculty at U.C.-Berkeley. He received an honorary Doctor of Humane Letters degree.

“Scholars cite your discoveries at Nemea — including a stadium and its tunnel, bathhouse, hotel, and 2,300-year-old starting blocks — as the most significant Greek archeological finds of the last half-century,” President White said of Dr. Miller. “In 1994, you dedicated Nemea’s stadium as an archeological site, and two years later, working with local officials, you helped stage the first modern Nemean Games, which were modeled after events that transpired more than 2,000 years earlier. You have continued to stage quadrennial games at Nemea ever since, and in 2011 you became President of the Society for the Revival of the Nemean Games.”

“Stephen G. Miller, you were drawn to the ancient world during your undergraduate days here at Wabash College, and you have applied the breadth of your liberal arts education in every aspect of your career. You once said, ‘My entrepreneurial spirit came, in part, from my experience at Wabash… because Wabash gave me the opportunity and tools to engage my life’s work.’ For so brilliantly engaging in that work, all of us at Wabash College salute you. “ 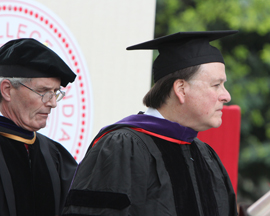 Chief Justice Shepard, who in 1987 was the youngest chief justice in America, received an honorary Doctor of Laws.

In presenting his citation, President White said, “Randall T. Shepard, native Hoosier educated at Princeton University and Yale Law School, we honor you today as a champion of justice. When you retired after 25 years as Chief Justice in March of this year, Indiana’s trial judges said your tenure as chief had ‘truly been transformative.’ While that is a significant compliment, it seems like an understatement when we consider all that you have done to improve the administration of justice in Indiana.”

President White went on to cite all of the ways in which Justice Shepard has changed the Court’s focus, provided access to the justice system for all Hoosiers, and pursued continuing education opportunities for judges.

“Justice Randall T. Shepard, Wabash College honors you today for transforming the Indiana Supreme Court, increasing public access to the Court and to the justice system, mentoring and educating young lawyers, and for thoughtfully and carefully interpreting the law.”

When the ceremony neared its conclusion, President White took the Caleb Mills Bell and issued a challenge to the graduates:

“The future may not always be easy, but I am absolutely confident that you will rise to the challenges and opportunities that lie before you, for Wabash Always Fights! And so men of the Class of 2012, as I rang you in four years ago, I now take up the bell of Caleb Mills, the first professor of Wabash College, and ring you out to your new life, your new responsibilities, and your new dreams.”

With that, the members of the Class of 2012 did what they had never before done: they walked — confidently and with purpose — through the Senior Arch.