Due to his various campus commitments, including lacrosse, Student Senate, and Delta Tau Delta fraternity, finding the right opportunity at the right time wasn’t easy for McGill to figure out on his own.

With the help of Amy Weir, director of international programs, the religion major and English and Spanish double minor was able to land a study abroad experience this summer that has helped shape his plans for the future. 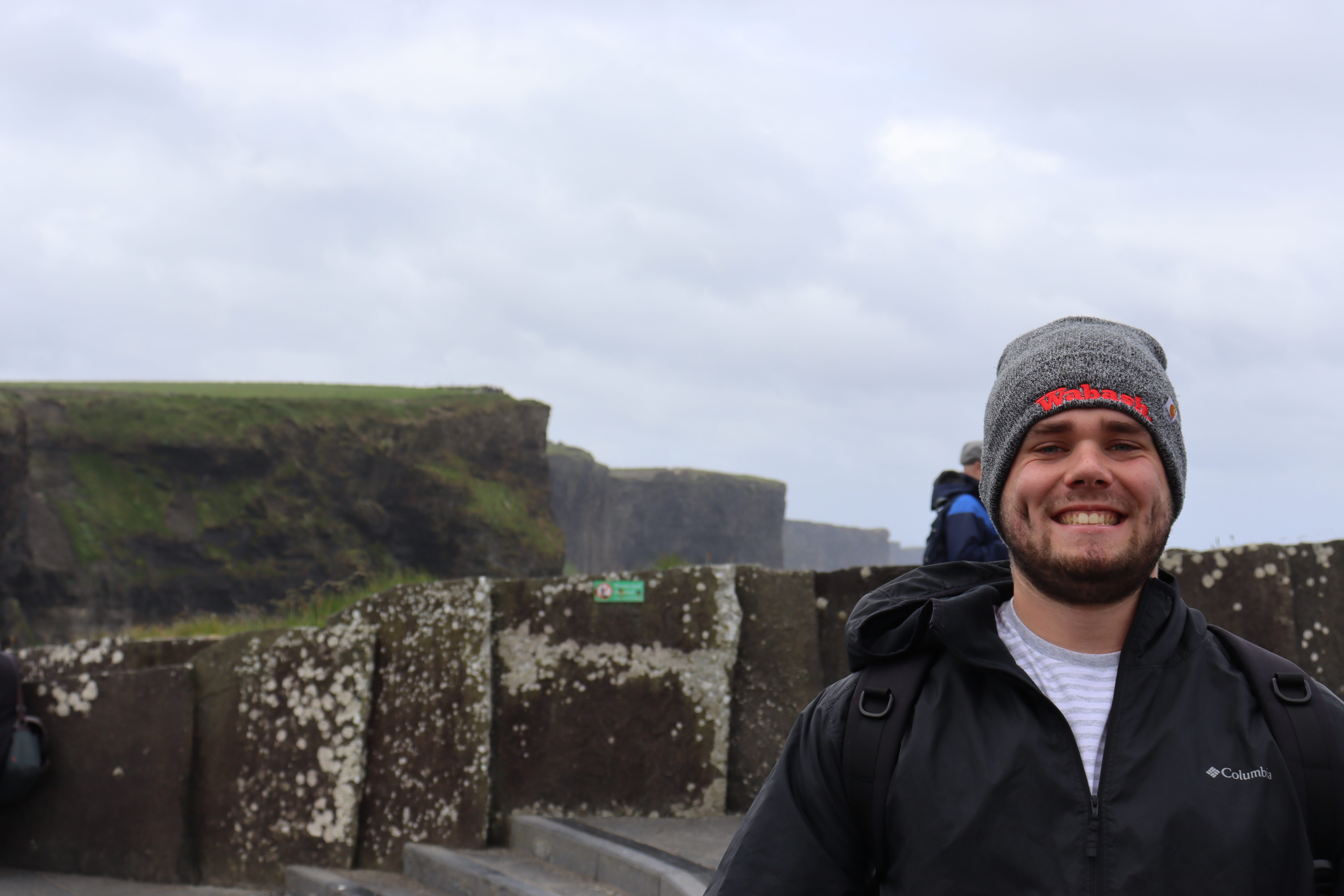 The Indianapolis native talks about being a scholar in a foreign country, the opportunities to explore a new culture, and what Wabash lessons he leaned on to succeed in the classroom.

I have aspirations to go to law school. As soon as I realized that I qualified for this program and what it was all about, I felt like it would be the best fit for my future.

We had class from 9 a.m. to 12:30 p.m. and then from 2 to 4 p.m. Monday through Friday. Every class was led by a different lecturer from the law school, and I got a deeper understanding of the way the legal system works from different perspectives. I learned about the Irish court system and how it differs from the U.S. We took an in-depth look at terrorism responses in Ireland, for example, and how its justice system is so different from ours.

Q: From those lessons, what did you learn that surprised you?

When comparing the U.S. to Ireland, one thing that surprised me the most was sentencing laws. A life sentence in Ireland is 19 to 21 years, it’s not for life, and they don’t have capital punishment. Ireland isn’t lenient necessarily, but there is more of an understanding and emphasis on rehabilitation and education, as opposed to punishment.

Q: How did the classroom set-up compare to Wabash?

The class was heavily lecture-based and there were only 12 students, all from different parts of the U.S. there, which made for some great discussions. Having that small class size and personal-feel with the professor felt very natural to me because of Wabash, but I was surprised by how many other students were never exposed to something like that. That alone seemed to be really foreign to some students, but I was thankful for it.

Q: What skills or experiences did you find yourself pulling from as a Wabash student during the study abroad?

The ability to be comfortable with being uncomfortable was a big one. At Wabash, we’re encouraged to speak up and share our thoughts and ideas. We have harder conversations in the classroom, and those experiences prepared me for this. I was only one of three white males in my class and we talked a lot about police brutality and the over-criminalization of minority groups. Without Wabash, I don’t think I would have had the confidence to speak up and participate in that conversation in the way I was able to.

Q: Did you get to do much exploring in your free time?

Yes, it was so cool getting to experience Irish life and culture the other 17 hours of the day. The university put on three different excursions that everybody could join. I went to Limerick, Dublin, and west Ireland to explore and learn about the culture and history of those places.

There was also a big emphasis on taking advantage of the weekends. So, every weekend I was in two of three different cities, like Galway and Cork. I went all over the place. Even though Ireland is a small country, all the areas felt super different. The architecture, food, people — it felt like you were going into a different country every time you moved from city to city.

Q: Did this experience influence your career goals?

It really was enlightening. This was the most in-depth law class I’ve ever taken and I quickly learned that pursuing a career in law is going to involve a lot of heavy reading and writing. I have a better understanding now of what to expect and feel more prepared to go to law school after Wabash.

Q: This was your first study abroad. How impactful are those opportunities?

If you talk to anyone from a bigger school, you’ll learn that study abroad opportunities are very exclusive and expensive. It’s not like that at Wabash. Study abroad is a major selling point. Wabash professors and staff care and will help get students to wherever they want to go. I really appreciated that help from Mrs. Weir and being able to spend my summer in Ireland.

It was a very educational trip, not just from what we learned in the classroom, but also from what I learned about myself. After all the traveling I did with new people from around the world, I really grew a deeper appreciation for another culture. I felt completely immersed in it, and I hope to be able to come back one day to learn and explore even more.