He wasn’t a fan of racing until his mom brought him to the Indy 500 time trials when he was 11. The speed of those cars amazed him. That kid from Warsaw, Indiana, might be surprised at the position his adult self has come to occupy near the center of the racing world.

Wesley Zirkle ’98 describes himself as “just an attorney.” However, his specialty is representing the teams and personalities who drive motorsports. His clients include two IndyCar teams; the Toyota factory team for midget racing, Keith Kunz Motorsports; and drivers, including Danica Patrick and Indy Lights’ Christian Rasmussen.

He is there to understand and protect his teams’ businesses, shape the negotiations that make them go, and figure the best way to approach deals and issues that affect the sport. His work touches on software, apparel, and e-commerce. He has closed $2 billion in motorsports sponsorship deals alone. 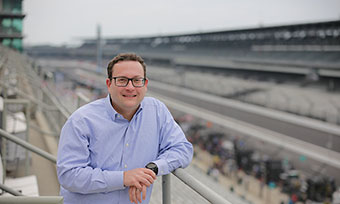 “I enjoy motorsports,” Zirkle says from a suite overlooking the front straightaway of the Indianapolis Motor Speedway. “But what I love is the business of motorsports. It is why I do this and why I get so fired up. It's fascinating.”

Twenty-seven years ago, as a freshman at Wabash, Zirkle was interested in international business and economics. It was a religion class with Dr. Hall Peebles that opened his eyes to a new field of study. One he eventually declared as his major.

“I enjoy the complexity of religion and the philosophy behind it,” he says. “That trained me to think outside myself and what I'm doing. There are a lot of external forces that influence the way we behave and religion, in many ways, taught us that. But there is also a moral construct, and to be a good business person, a good lawyer, you have to bring that to the table.”

In a profession defined by rules and outcomes, Zirkle has long had an ability to work hard, trust his gut, and look for those favorable results.

As a student at Indiana University’s McKinney School of Law, Zirkle managed a friend’s band, Baja Planet. “They weren’t very good and I got them a few terrible gigs,” Zirkle quips. But it was an experience that introduced him to the music space and representation.

While he was still in law school, a position came open at CMG Worldwide, an industry leader in personality 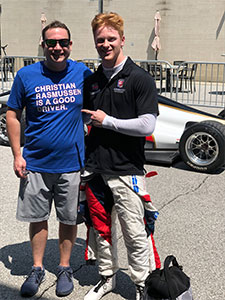 “I remember being impressed that Wes was sincerely interested in taking on the responsibility required for the position,” Faber says. “Wes was never intimidated by working with other smart, accomplished people. He is tenacious, and puts in the work to get to the right answer.”

Something clicked for Zirkle at CMG. He discovered he loved the intellectual property work, which led to his first deal in motorsports, the Aerosmith IndyCar in 2001.

“We were representing a team who was able to get Sony that ‘Just Push Play’ album cover on the car and Steven Tyler to sing the national anthem,” Zirkle remembered. “I did that. My first-ever motorsports deal was something nobody was doing.”

In 2004, he connected with Zak Brown, now the chief executive officer for McLaren Racing, who had founded a company called Just Marketing International. Zirkle helped grow that company into the largest motorsports marketing firm in the world, and within 12 years, rose to the position of executive vice president and general counsel.

“We all learned together, we were small when I started. We eventually grew and opened offices in Indiana, Montreal, Charlotte, Hong Kong, London and Abu Dhabi.”

He was behind the Bitcoin-sponsored car last year, and at one point, he handled the negotiations for three of the five global partner deals for Formula 1 racing. 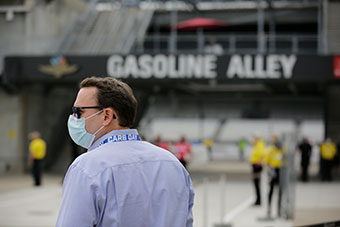 Zirkle prefers the role of general counsel and he’s learned that it takes time to build, develop, and strengthen the relationships within the client’s organization necessary to be an effective counselor. In September 2020, Zirkle decided to go out on his own. He opened Zirkle Advisors, which gives him the freedom to represent clients as he preferred—engage directly and take the time needed to get it right.

“The way I operate is to best understand their business,” he says. “My job is to see around the corners. The closer I am to my clients and their business, the easier I can raise my hand and say, ‘wait a minute, if we think x, y, and z are happening, let's think about the downward effect.”

Zirkle hasn’t forgotten the lessons delivered long ago in a classroom discussing religion.

“Wabash was a place that always expected more of me than I did of myself,” he said, “and there is a confidence that comes out of hearing you can do more than you realize.”