WHERE DO I START?

I’ve written about a dozen pieces for WM the past five years, but this has been the toughest one to write yet.

It’s not because I struggled to come up with something to put on paper about gratitude, but rather because too many people come to mind. My brain has flooded with memories of the people who have made my Wabash history rich and helped develop me into the person I am today. So the problem hasn’t been, “Oh no, where do I start?” The problem has been, “Wow, where do I start?”

The event-filled fall of 2021 brought several moments for me to witness overwhelming gratitude. One of my favorite Wabash events, the Athletics Hall of Fame Induction Ceremony, occurred on the Friday evening of Homecoming Weekend after a year’s postponement.

The inductees always provide such honest and heartfelt remarks as they share their appreciation for coaches, teammates, and others who helped them succeed at Wabash and beyond. This year, roughly half of the inductees expressed their gratitude to one person in attendance: Rem Johnston ’55, the Big Cookie. 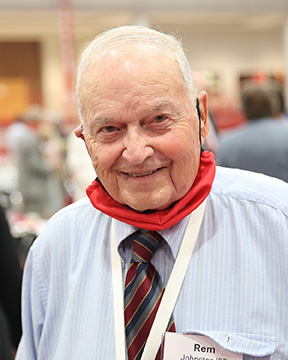 I could write pages on how important Rem has been for decades of Wabash men, and that includes yours truly in a huge way. Rem makes a great effort in getting to know Wabash students and provides wise counsel, even when he doesn’t realize he’s doing it. And he hasn’t let up. Just this past summer, I introduced Rem to a Wabash student at the Big Cookie golf outing in Fort Wayne. Rem asked how things were going, and the student-athlete talked in detail about getting ready for his sports season. Rem cocked his head, looked up toward him with a look I’ve seen countless times, and said, “And how about your classes?”

The message was loud and clear—student-athlete.

With the Athletics Hall of Fame, the Little Giant Stadium and Navarro Field Dedication, and the Inauguration, this fall has been somewhat of a who’s who in Wabash history, and I am so indebted to many of them. I am fortunate to provide color commentary during football games in the Dimos Broadcast Booth, named in memory of my fraternity brother, Jim Dimos ’83. I was able to see Laura and Greg Carlson, who coached me as a player and mentored me as a young coach. Cal Black ’66 helped lead his 55th reunion effort, which raised $3.3 million that led to the dedication of the Class of 1966 Lodge. I ran into John Goodrich ’68, who has recruited more than 100 students to Wabash. He is still recruiting. He and his son, J.B., had two more prospective students with them that day. Legendary coaches Mac Petty H’82, Rob Johnson H’77, and Gail Pebworth H’91 not only appear on pillars in the Hall of Giants at Little Giant Stadium, but all attended the Inauguration Dinner. Think about the lives they touched over their combined nine decades of coaching.

These words are inadequate in both description and thoroughness. I know they can’t express my deep thanks, and I’m certainly leaving out so many teammates, fraternity brothers, coaches, colleagues, and former players I coached.

Having all these relationships for which to be grateful is the norm here. When you get the chance, thank the Wabash people who’ve been important in your life.

Be ready, you’ll likely find many more to thank than you expect!