Luis Rivera ’25 had his hesitations about coming to Wabash College. As a gay man, he worried that he might not fit in at an all-male college. But after spending his summer on campus with the WLAIP, he’s confident he’ll not only fit in, but thrive over the next four years.

“I was simply going through the motions of school, not thinking much about my reality or the effect it could have on others,” Rivera says in an oral essay—the last assignment he and 23 other then-incoming WLAIP freshmen were tasked with completing before the start of the school year. 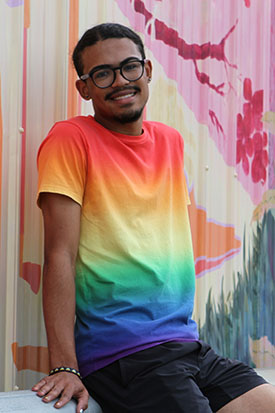 “I didn’t consider that I, a 19-year-old gay, Black, and Latino man, had a voice that mattered,” he says, going on to recall an interaction he had with a classmate this summer on campus.

“He came up to me and said, ‘Luis, I am going to be honest. Before I met you, I was homophobic and I didn’t really understand gay people. But you opened my eyes to see that they are just normal people and deserve to be treated that way.’”

The comment was one that stunned Rivera in a good way. It touched him deeply and showed him something for which he had been searching for a long time—the power of his voice.

“I want my voice to force people to rethink their preconceived notions about the LGBTQ+ community, and see the world through more than just their own eyes,” Rivera says.

Rivera joins the Class of 2025 from Wake Forest, North Carolina, where he attended Wake Early College of Health and Sciences. As a long-time competitive volleyball player, he was attracted to Wabash’s new varsity program and the promise of small class sizes, internship opportunities, and job placement after graduation.

“When I came to visit with my dad, we met students on the volleyball team and faculty members,” says Rivera. “Campus was beautiful. Everyone was friendly and welcoming. All of it just made me feel like maybe this is where I needed to be.”

After taking a gap year, Rivera was eager to jump into the college experience. He was nervous, too.

Rivera came out in high school at a time when he was beginning to discover and become more comfortable with his sexual identity.

“I remember going to a Pride rally with a couple of close friends. Seeing other people full of love for each other, feeling proud of that love and so unapologetic about who they are helped me discover who I am,” Rivera says. “That was a pivotal moment for me. Shortly after, I came out to my friends and, unsurprisingly, they were so supportive and proud.

“Telling my parents, I was so scared. Before I could even tell them and get my words straight, I started crying and I couldn’t stop. I felt so much emotion, like they were going to be ashamed of me for confessing this.

“They were super, super supportive,” Rivera says. “My dad and mom are my favorite people, my best friends. I’m so lucky to have them be so loving and supportive of who I am.”

As he was getting closer and closer to moving to campus, Rivera started to worry he might not have similar support at Wabash as he did at home, where he could be his “true, authentic self.”

“I kept holding on to the feeling I got when I visited campus,” Rivera says. “I have to constantly remind myself that it’s OK to just be myself. I’m not doing anything wrong. I’m just living my life.”

Dr. Jill Lamberton, Special Assistant to the President for Diversity, Equity, and Inclusion, taught English 101 this summer for the WLAIP.

In the course, students were required to engage in classroom discussions and write summaries that displayed critical thinking in relation to assigned readings. Much of what students read were personal essays, written by people whose identities would resonate with WLAIP students.

Many of the readings were written by people of color and featured themes of identity and feelings associated with leaving home and entering a new culture. Lamberton says the course assignments authorized students to “tap into their own experiences.”

“Luis didn’t lead with his sexual identity,” Lamberton explains. “It was something that he was willing to draw on when he needed it for the kinds of stories he was telling and points he was making to help others understand.

“What impressed me the most about Luis was his willingness to reflect. It requires a lot of introspection and critical thinking. I think both of those things are what really stuck out in his audio essay.”

The prompt for the audio essay was open-ended, simply asking students to compose a three-to four-minute piece about their own experience with and commitment to education.

Rivera could have picked one of the readings or discussions from the class and reflected on it further for the essay. He could have talked about high school and how expectations of what it means to be academically successful changed when he came to Wabash. But he chose to be vulnerable and to dig deeper into what it was like to discover and develop his voice, while also educating his peers.

“Some WLAIP students came from backgrounds that weren’t necessarily closed-minded, but lacked diversity. They had never been around a gay person before or lived in communities with people of color,” Rivera says. “So, when they saw that I was just a normal person, I wasn’t living out these stereotypes of what they had pictured a gay, Black man to be, they were confused and questioned a lot.

“I wasn’t used to that, but at the same time, it was awesome to have these candid conversations about identity,” Rivera continues. “That message of acceptance and personal growth was what I wanted to get across in my audio essay. I would love for other people who aren’t comfortable in their skin to know that there are others out there who are. Go meet them, talk to them, and learn about what makes them different and special. I want everyone—no matter their race, sexual identity, whatever—to feel like they belong.”

Earlier this summer, Rivera reached out to Dr. Karen Gunther, professor of psychology, to express an interest in ‘shOUT (Wabash College’s Gay-Straight Alliance), and to receive guidance on what it was going to be like as a queer student on campus. Gunther connected Rivera with a number of alumni, including Rob Shook ’83, engagement manager at IBM and former president of the NAWM Alumni Board.

“I was reasonably closeted coming into school,” says Shook, a member of Lambda Chi Alpha and the chapter’s current alumni advisor. “The guys in my fraternity knew, and it wasn’t a big deal to them, but that was the early ’80s. It was a very different time, and I wrestled with being Christian and being gay.

“There’s this saying, ‘Be the person you needed when you were younger,’” Shook says. “That’s what I try to be for these guys. We can laugh about stupid things. We can talk about the serious stuff. We can cry when it’s time to cry.”

What impresses Shook about Rivera is his self-awareness, visibility, and ability to communicate. He says those three traits, coupled with intellect and curiosity, will make the young Wabash student “pretty unstoppable.”

Rivera has big plans for his future at Wabash.

He wants to major in psychology and minor in chemistry. He wants to dominate as a player and leader on the volleyball team. He wants to join various organizations like the Malcolm X Institute of Black Studies, La Alianza, ‘shOUT, and Student Senate in order to promote visibility on campus. He wants to become a Wabash Democracy and Public Discourse and Global Health Initiative fellow and make powerful contributions to the community.

“Four years from now, I hope to look back and be proud,” Rivera says with a smile. “I hope my confidence grows even more, and that I can use my voice to inspire other students like me.”