WM: That Much Easier to Succeed

The Tyler Watson ’22 the Wabash community has come to know is a world apart from the person who arrived on campus four years ago.

Tyler Watson ’22 grew up in Brownsburg, Indiana, and attended Tri-West High School. There, he was a good student and well-known for his exploits on the basketball court, where he scored 1,999 career points. He is the first to admit that he wasn’t prepared for Wabash when he arrived on campus. 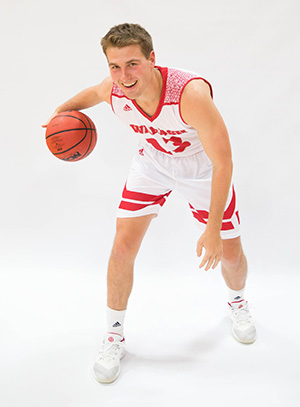 Watson scored 26.6 points per game as a senior in high school. When he first came to Wabash, he struggled immensely.

In high school, Watson’s identity was consumed by his role as an athlete. At Wabash, that proved to be a detriment.

Watson’s struggles on the court consumed him. He’d spend hours after practice putting up shots, hoping to improve. Instead of improving, he continued to struggle.

Watson’s break came in January of his freshman season. He’d been seeing playing time off the bench, but got the opportunity to start in place of an injured player. He scored 20 points. He’s started every game since. His success on the court coincided with a new level of comfort on campus. As he invested in his peers and professors, he became more than just a basketball player.

“He became much more comfortable with his professors. He started to hear his own voice and felt more comfortable speaking up,” Brumett said. “People started recognizing him, giving him some confidence and more responsibility outside of basketball. I think he appreciated the opportunity and ran with it.”

Watson was an RA heading into his sophomore year. That same fall, he had his first interaction with chemistry professor Dr. Laura Wysocki, whom he credits as one of his most influential professors.

“As educators, we talk a lot about the importance of having a growth mindset. Wherever you are right now, you can always get better,” Wysocki said. “That really is Tyler to me. In organic chemistry, he knew that if he worked really hard at it, sought feedback, and used resources, he could get to that next level. Even when he achieved that next level, he was looking to improve from there.”

During the Fall of 2020, Watson was a leader on the COVID Action Response and Education (CARE) Team, jumping into action to ensure that students still had a way to connect with each other. He organized outdoor activities, including community service projects around Crawfordsville to keep students engaged and involved. Students worked on projects at the Amtrak station, Milligan Park, the Crawfordsville District Public Library, the Crawfordsville Airport, and Bethel AME Church.

Watson prides himself in the connections he’s made with students. Odds are, if he sees someone walking around, he knows them. And if he doesn’t, he will soon.

“He brings a certain energy to a room,” said Parker Manges ’21, Watson’s former teammate. “Wherever Tyler goes, that place ends up becoming a little better and happier.”

Watson is unsure of what his future holds. He might take advantage of his extra year of athletic eligibility. Eventually, he wants to be a doctor.

“The idea of being a doctor is something that I really fell in love with at Wabash,” he said. “I want to feel like I’m making a difference, but I also want to have daily interaction working with people and working in teams. I feel like a doctor is just the epitome of that.”

Regardless, he knows he is set up for success because of his time at Wabash.

“The skills I’ve gained here will make me successful beyond Wabash,” he said. “I’m confident that I’m going to have a plan by the end and it’s all going to work out.”

Another thing is certain: The campus community will miss Watson’s presence, but the impact he’s made will continue.