Borland ’22 Builds Confidence One Note at a Time

As Will Borland ’22 stepped down from the bleachers and made his way to the front of the pack to conduct “Alma Mater,” it was all he could do to keep a smile on his face.

It was Oct. 8 and Borland was directing the Glee Club at President Scott Feller’s inauguration. 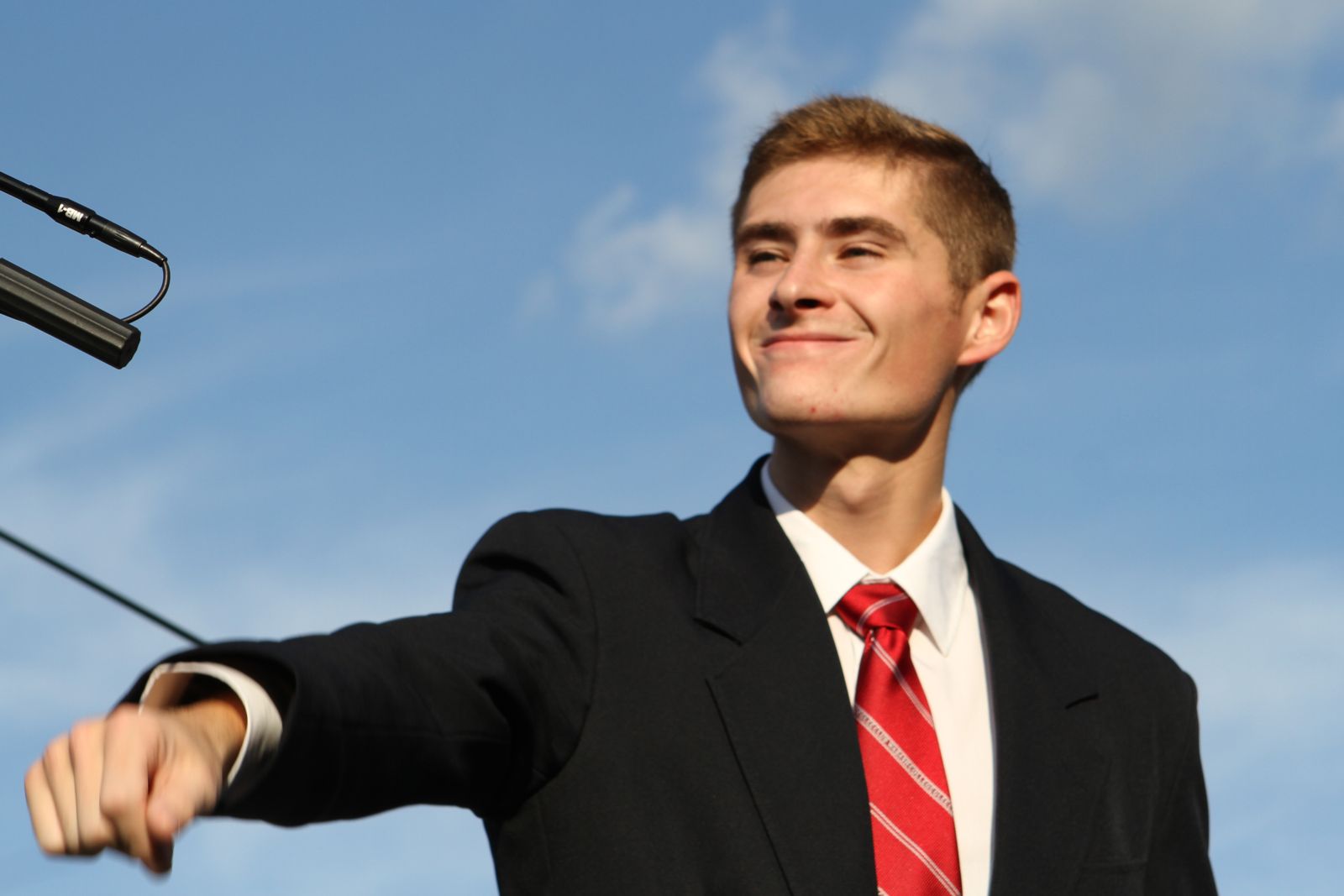 “My brain pretty much went blank — it had to or else I was going to be distracted, thinking too much about how nervous I really was,” Borland said, recounting the performance in Little Giant Stadium.

“Normally, I just move my hand, watch the guys’ faces, ensure that they’re smiling, watching me, and in sync with the music,” he said. “I was added to sing as well that day, so there was an extra layer that went into this performance.”

Under Borland’s leadership, the Glee Club put on a flawless performance and earned loud applause from the president, students, staff, faculty, and guests.

The experience is one that the religion major and global health minor is proud of, and as he reflects on his time spent with Glee Club, it’s one he says he wouldn’t have had the confidence to pull off three years ago.

“When I look at myself compared to who I was my freshman year, I see someone who is more confident and willing to say ‘yes,’” the Glee Club President from Huntington, Indiana, said.

When Borland first arrived to Wabash, he knew he wanted to get involved in some kind of choral group. He’s had a love for singing since he was young and hoped to find an opportunity on campus to showcase his passion.

“I was always a very good tonal learner, so singing came naturally to me. But singing technique was something that I didn’t have much experience with,” said Borland, who was involved in show choir in high school. “I was excited when I found out that Glee Club is an accepting place for everyone, no matter their background or abilities.”

The Glee Club has been an indispensable part of life at Wabash College for more than 100 years. Established in the 1890s, the group includes students from all academic disciplines who perform for a variety activities and present numerous concerts during the academic year.

He remembers feeling nervous when he first joined. As a younger performer, he used to get very hung up on missed notes and rhythms, and it didn’t take much for him to get upset over a mistake.

Over time, Borland’s confidence in his abilities and overall maturity grew. He became more open to critiques and feedback. He developed communication and management skills, and learned about the importance teamwork.

“Freshman year, if someone would have come up to me and said, ‘You missed that note,’ I would have said, ‘Oh, no! What?’ Now if that happens, I’m like ‘C'est la vie (such is life).’ I’ve learned that it’s OK to make mistakes. What matters is how you bounce back from those moments,” Borland said.

“I’ve been involved with Glee Club, TEDx, the Global Health Initiative, different internships and volunteering while at Wabash — all of those build leadership skills. That involvement has helped me grow and understand how to interact and respond to different people and situations, and how to ensure that I’m calm and thinking straight for the benefit of the full group.”

Sarin Williams, director of choral activities and associate professor of music, said she’s been impressed with Borland’s active engagement in, and commitment to, the Glee Club.

“Will has jumped into Glee Club leadership with both feet this year,” Williams said. “He has taken on tasks within, and outside of, rehearsal to benefit all of the men of the choir and works hard to serve the group well. He has the utmost musical integrity and wants to encourage every man in the ensemble to do his best.” 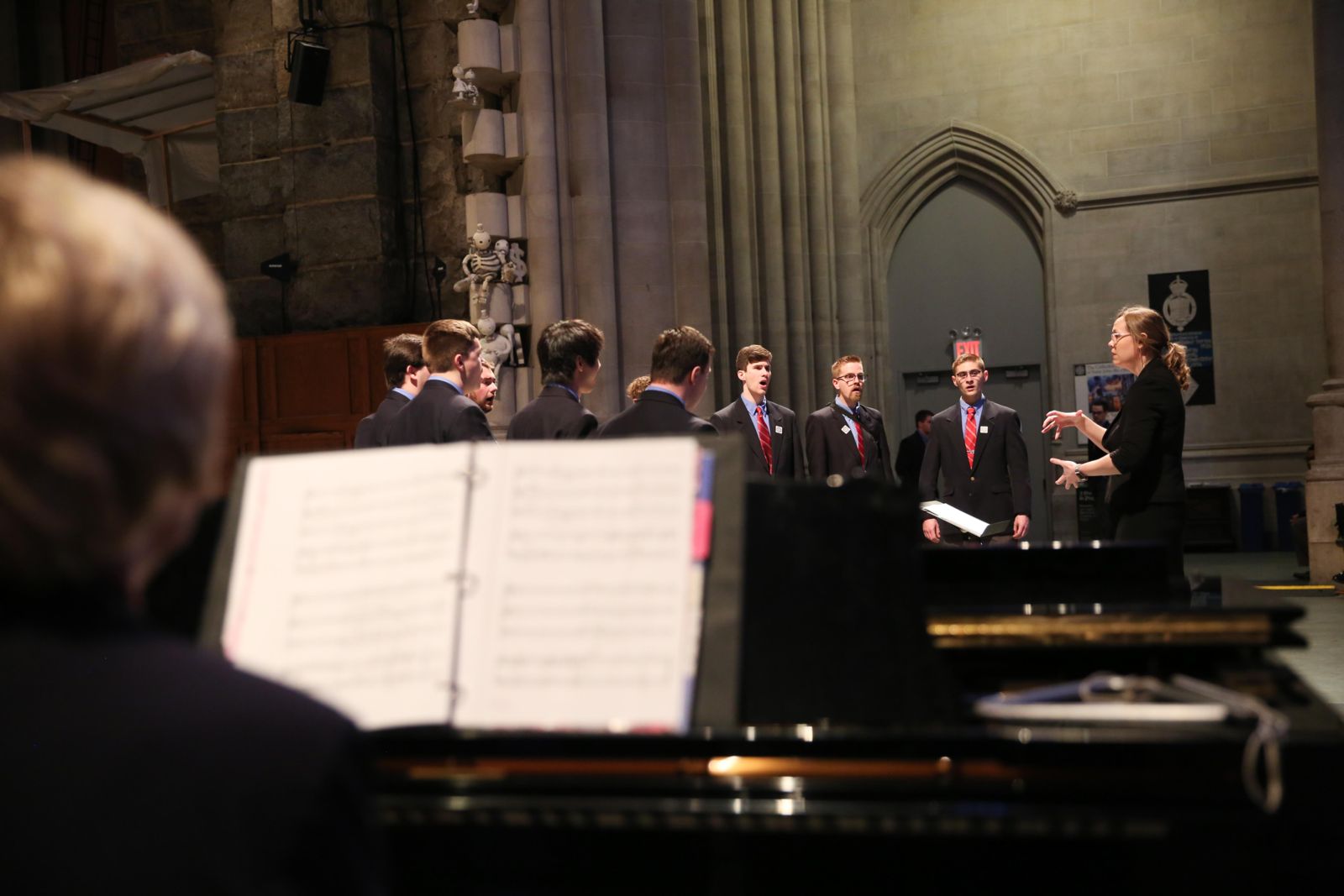 Ben Bullock ’22, a Glee Club officer and section leader, described Borland as “everything you would expect from a president.”

“He's funny and charming, but knows when to get stuff done. He has a lot of time for everyone in the group and pays particular attention to new members,” Bullock said. “Will is always trying to help out where he can and make sure we sound our absolute best.”

“Will is always going for those crazy high notes that nobody else in the group can reach,” Bullock said. “It's quite impressive to witness and will definitely be my lasting memory of him.”

One aspect of his Glee Club involvement that Borland said he’s enjoyed the most is the immersion trips. From picking tea on top of a mountain while touring Taiwan to singing in St. John the Divine Cathedral in New York City days before the COVID-19 pandemic shut down the country, the senior said there were many memorial moments he shared with his peers.

And there’s more yet to come as the Glee Club plans to spend spring break touring Branson, Missouri.

“Everything is kind of coming down to the wire, but I’m very open and excited,” said Borland, who plans to pursue a career in healthcare after graduation. “I’ve got my whole life ahead of me.”