Wabash College President Scott Feller has announced that a $10.6 million gift will enable the College to launch the Stephenson Institute for Classical Liberalism, which supports the College as a forum for understanding the foundations of a free society. 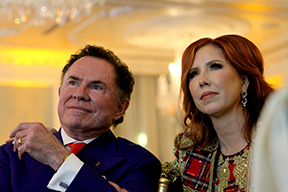 The Stephenson Institute is made possible by the support of Richard J Stephenson ’62 and his wife, Dr. Stacie J. Stephenson, along with his family, including Wabash alumni Dr. Christopher (’87) and Jamie Stephenson and Shawn (’98) and Morgan Stephenson.

The Stephenson Institute will complement the work of Wabash’s existing co-curricular initiatives, providing a student-centered forum that asks important questions about personal responsibility, individual rights, freedom of speech, and the indispensability of freedom.

“At Wabash, we educate students to ‘act responsibly’ and to ‘lead effectively’ with the understanding that they will go out into the world to act and lead in ways that support human flourishing—and the work supported by the Stephenson family will reinforce these efforts,” President Feller said. “At a moment when people are questioning higher education’s commitment to open inquiry, the Stephenson family’s gift is a strong endorsement of Wabash College as an institution that continues to discuss and debate big ideas rather than ideology.”

President Feller joined the Stephenson family and over 130 guests at the Hotel Carmichael in Carmel, Indiana to celebrate the launch of the Stephenson Institute on October 15. George F. Will, America’s foremost political columnist, provided the evening’s keynote address, “Why I (Still) Believe in Classical Liberalism.”

Mr. Stephenson grew up with modest means in small-town Sheridan, Indiana. Between his parents’ positive attitude and his own personal initiative, Mr. Stephenson became convinced of the importance of the individual in maintaining a free society. As he was working his way through school while attending Wabash College, Mr. Stephenson met the late Economics Professor Benjamin Rogge, and became immersed in the principles of a free and open society.

“Early on, Ben Rogge introduced me to the leading lights of an important generation of scholars—Milton Friedman, Friedrich Hayek, Ludwig von Mises—and they became my teachers,” Mr. Stephenson said. 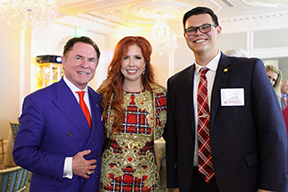 After graduating from Wabash, Stephenson would go on to become an entrepreneur and merchant banker. While studying at Northwestern University’s Law School, he established International Capital Investment Company, for which he still serves as chairman. He’s a member of the Horatio Alger Association of Distinguished Americans, a philanthropist, and the founder of Cancer Treatment Centers of America, Gateway for Cancer Research, and numerous other businesses and charitable organizations. For his service to others, the National Association of Wabash Men bestowed upon him the Clarence A. Jackson Distinguished Career Achievement Award.

For Mr. Stephenson’s lifelong dedication to promoting classical liberalism and entrepreneurial freedom, he received the Hayek Lifetime Achievement Award from the Austrian Economics Center and Hayek Institute, and the Leonard E. Read Distinguished Alumni Award from the Foundation for Economic Education.

Mr. Stephenson was shaped by Wabash’s legendary Gentleman’s Rule, which states that a student must “conduct himself at all times, both on and off campus, as a gentleman and a responsible citizen.” This simple rule for student conduct celebrates personal responsibility. As Mr. Stephenson explains, this sense of moral responsibility led him to give back, including to Wabash students who are just getting started: “When you see someone less well off than yourself, and you are in a unique position to do something about it, you step into the opportunity,” said Mr. Stephenson.

Thanks to Mr. Stephenson’s generosity, the entire Wabash College community will benefit from new lectures and workshops organized by the Institute, as students engage in conversations with world-class thought leaders. Professors will be able to accelerate their research projects, improve course offerings, and plan more student immersion trips. More students will be supported in summer internships with national and international public policy organizations aligned with the mission of the Stephenson Institute. 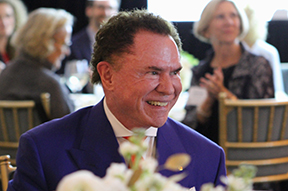 In a pre-launch phase of the gift that began last fall, funded by Dr. Christopher Stephenson ’87 and his wife, Jamie, many students have already benefitted from paid internships they held last summer. Bryce McCullough ’23 explained the value of his stipend: “I was able to live in D.C. without rent or food costs hanging over my head… It was one of the best experiences of my life—filled with networking and learning, including connecting with Wabash alumni living in the nation’s capital.”

“The College began expanding its public-policy offerings under the Wabash Public Policy Project (WPPP) last fall,” said Acting Director Lewis McCrary. “With the launch of the Stephenson Institute, we will be able to extend the range of programs the College offers to students.”

This continued expansion also includes renovating a historic home near the center of the campus, which will house new offices for the Institute’s staff and student fellows.

“Thanks to Dick Stephenson’s leadership and generosity,” said McCrary, “the new programs of the Stephenson Institute will contribute to Wabash’s robust intellectual life, bringing our students additional opportunities that change lives.”