Criddell ’22 Makes Impact On and Off the Track Before practice, you can find distance runner Clarke Criddell ’22 playing knockout with his teammates. But he’s certainly not playing to win.

“He can’t shoot a basketball to save his life,” Wabash track and field coach Clyde Morgan said with a laugh.

When Criddell stepped onto campus from Fractional Township, Illinois, he wouldn’t have chosen to put himself in a position to be vulnerable. He struggled to find his place, and struggled to voice his opinions. His fear of making mistakes, whether it be not understanding a joke from a teammate or giving the wrong answer during a class, led him to avoid engaging with others. 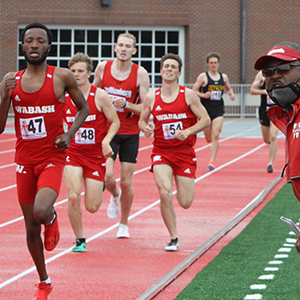 “A few years ago, one thing I lacked was the ability to speak up for what I wanted,” he said. “I didn’t take criticism well. I didn’t take jokes well.”

Over the course of the last three years, his confidence has grown because of his involvement on campus. Now, he’s making an impact on others.

“He learned to be more involved than just cross country, track, homework, and doing it all over again,” Morgan said. “He bought into the total campus experience. I see him talk with different guys of different backgrounds. He’s eager to get to know guys.”

Math and computer science professor Colin McKinney is Criddell’s academic advisor. He’s seen Criddell evolve into a more confident student-athlete. Criddell, a rhetoric major and a math minor, interned for Northwestern Mutual this summer and is interested in becoming a financial analyst. The variety of his interests means he interacts with students and professors all across campus. Those interactions have led to leadership opportunities, both as a teammate and a student.

“I realized that if I wanted to be a better person, I should be involved in as many things as I possibly can,” he said.

During the summer after his sophomore year, Criddell did a research internship with McKinney and served as a math tutor for incoming freshmen participating in the WLAIP (Wabash Liberal Arts Immersion) Program, which prepares students for life on campus. Criddell had participated in WLAIP as a freshman.

McKinney said Criddell’s insight proved more valuable than anything a professor could say.

“They really listened to his experience,” McKinney said. “That was absolutely indispensable. I can sit up there and tell the students, ‘You're going to have to work really hard.’ For them to hear about the importance of hard work from somebody who had just gone through the program, it really resonated with that next cohort of students.” 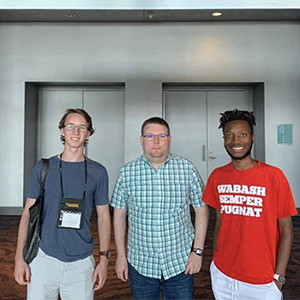 “I've been in a situation where I was the only diverse student in my house,” he said. “That shouldn’t be the norm. I want to help bridge the gap.”

“He has taken some freshmen under his wing and has become a really positive force for the team in terms of leadership,” he said. “He's been a great story to tell recruits about how beneficial this place can be for people. He's a great example of how someone can thrive here if they step in, listen, work, and take advantage of opportunities.”

Criddell’s work ethic has paid dividends athletically, too. He trimmed nearly three minutes off his 8k time between 2018 and 2019, and trimmed more than a minute off his 6k. His mile time decreased by 16 seconds. Last year, he was named the track and field team’s most improved runner. He says his favorite aspect of running is incremental growth.

“Any time I hit a new personal time, I always get a big grin on my face,” he said. “I’m always happy to see I’m getting better. That’s always one of my biggest accomplishments every year.”

The steady improvement has been a common theme for Criddell throughout his time at Wabash — athletically and socially.

“What I noticed about Clark right away is that he was always ready, willing, and eager to learn,”  McCreary said. “Even with hiccups along the way, he was the guy that always put his nose to the ground and paid attention and worked hard. His growth as a runner was solely because of his willingness to put in the work and to do the right thing, be responsible and professional about how he handled himself, but also to listen and go through the ups and downs of this sport."

Criddell’s impact has come in subtle ways, from conversations with students in his fraternity house to conversations on the track during practice. They’re all aimed at the same thing — making students feel at home, just like he does.

“Like every Wabash man, I had my fair share of struggles my freshman year,” he said. “I can speak from my experiences. I feel like I can tell the younger guys that you can be better if you put in the effort. You're joining a brotherhood. The people here want you to succeed.”