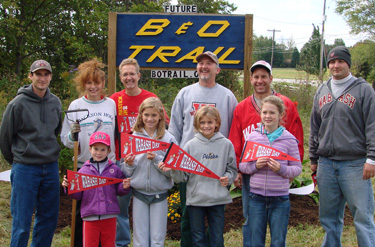 For the second year in a row about a dozen Wabash alumni, family and board members of the B&O Trail Association gathered at the future site of a fitness trail that will someday run from Hendricks County to downtown Indianapolis. Last year, this group of volunteers was responsible for clearing an area just off of State Road 267, landscaping and putting up a sign to draw attention to the future trail. As a result of this effort, Dave Jackson ‘87 joined the B&O Trail Association and is now a board member. An expanded group of volunteers came together again this year to continue the work begun on the last Wabash Day.

Derick Busenbark ’03 leveraged his connections to a family business, Busenbark Lawn Equipment, which was begun outside of Crawfordsville in 1973 and now has a location just down from the B&O Trail. Derick’s high-powered mower enabled us to clear a major pathway into the trail corridor. Volunteers Dave Jackson ‘87, Jim Kerr ’92, Jared Stark ’94, Gregg Sweeney ’76 and Maureen Ward (mother of a ’05 graduate) worked to clear weeds and tall grass, pick up trash and fill-in large holes at the trail entrance.

Kristi Kerr along with daughters Courtney and Kaylee and Colette and Caroline Jackson planted mums and mulched the area around the B&O Trail sign. Once again, Frazee Gardens, a local nursery and landscaping company located across the street from the trail, donated the landscaping and flower materials for the project. B&O Board Member Hall Virgil provided guidance and helped in today’s efforts as he did a year ago.

This remains an important project for the people of Hendricks County as we hope it will one day improve fitness, encourage community and provide enjoyment for many people. We were especially proud that this project brought together many people and organizations - Wabash alumni, families, a community association, and local businesses. Each contributed to the success of the project.