The Wabash College Theater Department will be well represented when the curtain rises on the 2017 Indy Fringe festival Thursday in Indianapolis.

Of the 72 regularly scheduled productions slated for the 11-day festival, five efforts – I, Nephi: A Gay Mormon’s Survival Guide; Spectrum; Fear of Flowers by Neil Martin; Jubilee in the Rear-View Mirror; and The Beast, The Lady, and The Sanguine Man – include current Wabash students or recent graduates in the cast or production staff. Further, both I, Nephi and Spectrum originated on campus.

Now in its 13th year, the Indy Fringe mission is to encourage and support local artists in bringing new theatrical ideas to a local audience. Such a mantra dovetails well with the Wabash Theater’s fundamental commitment to student creativity. 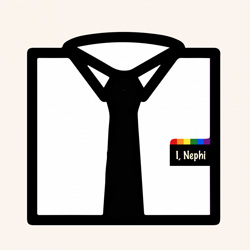 presence at Indy Fringe is a testimony to our belief in theater as an incubator of student creativity,” said James M. Cherry, Chair of the Wabash Theater Department and Associate Professor of Theater. “A vital part of our work is to enable our students to make their own theater, tell their own stories, and discover their own truths. I, Nephi and Spectrum are pieces that perform the liberal arts, make the liberal arts manifest. Both engage complex, fraught topics – LGBTQ issues in the Mormon Church, and Autism Spectrum Disorder – in frank, unexpected ways.”

I, Nephi: A Gay Mormon’s Survival Guide is the first to the stage, opening Thursday at the Phoenix Theater. Written and performed by Joe Mount ’15, produced by Rory Willats ’17, this one-man play is a tale of secret lives, revealed scripture, and sexuality. I, Nephi recounts the true story of a man reconciling the world of his family with the culture of his sexuality, asking “What's gained – and lost – embracing who you are?” 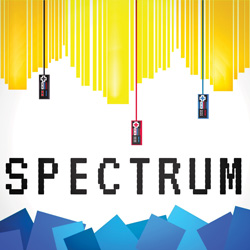 neurology, and family. Written by Ian Little ’20 and produced and directed by Zach Anderson ’18, this production follows the story of Jace, a gamer who happens to have autism spectrum disorder. Witness him overcome social anxiety through video gaming and learn how to navigate in a world that operates on a different set of rules.

“I hope Spectrum challenges preconceptions for those unfamiliar with Autism Spectrum Disorder, or work against possible stigmas,” said Anderson. “Things have changed a lot in the past 15 years in terms of research and how that impacts work done with the ASD community. How do we as a society handle the growing need for non-neurotypicals, like Jace, to live independent lives? I hope this production can act as a catharsis for those on the spectrum.”

A pair of productions open Friday at the Indianapolis Fire Fighters Museum (IFM). The first is Fear of Flowers by Neil Martin. Produced by Veneziana Productions and highlighting Spencer Elliott ’10 in the cast, Flowers asks audience members to consider a world where women are uninhibited and men are sensitive. Bears are revered, flowers are feared, and food is, well, not simply consumed. Confused? You won’t be after seeing the hilarious new adult play that flips gender expectations and explores how far we’ll go for love.

Also opening at the IFM Friday is Jubilee in the Rear-View Mirror. Featuring Donovan Whitney ’16, Jubilee is set during the Freedom Summer of 1964, where a young African-American civil rights volunteer (Kates) shares a jail cell in rural Mississippi with a racist white man (Buell) who is coming off a drinking binge. Buell soon learns his cellmate “don't act like one of our n-----s.” 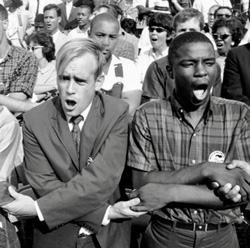 Venture back to the Roaring Twenties for Saturday’s opening of The Beast, The Lady, and The Sanguine Man. This epic, live-action, silent film is produced by NoExit Performance and features Matt Goodrich ’09 in the cast. The action follows Alma, the heroine, as she leaves her childhood home for Pineborrough, where blood boils hot, morality gets questioned, and love is sought in the shadows of night. Can Alma resist temptation in a city of monsters? There are six performances at the Theater on the Square to find out.

Cherry takes particular pride in the fact that such thought provoking pieces, written, produced, and performed by Wabash Theater protégés, can be spotlighted at a wide-ranging festival like Indy Fringe.

“Live performance, the communion of audience and performer, is a potent site for the exploration of complicated topics,” Cherry said. “It's particularly exciting when its student-conceived, student-driven, and then offered up for the world to experience.”

The Wabash College Theater Department was rated No. 7 nationally in the 2016 edition of The Princeton Review.

Tickets for the Indy Fringe festival, which runs Aug. 17-27, can be found at www.indyfringe.org.

Fear of Flowers by Neil Martin

Jubilee in the Rear-View Mirror

The Beast, The Lady, and The Sanguine Man