While the tradition of singing at Wabash College dates back to its earliest years, the first formal organization for singers was established in the 1890s, as the Wabash Glee Club and Mandolin Society. Though mandolins have long since ceased to accompany the singers, the Glee Club has been a indispensable part of life at Wabash College for more than 100 years. The Glee Club performs for a variety of College activities and presents a number of concerts during the academic year. The group also makes a week-long concert tour in the U.S. each March, during the College's Spring Break. In March of 2006, the Glee Club was invited to perform for the Intercollegiate Men's Choruses National Seminar. The Glee Club made a two-week concert tour to Wales, England, and Scotland in May of 2006. 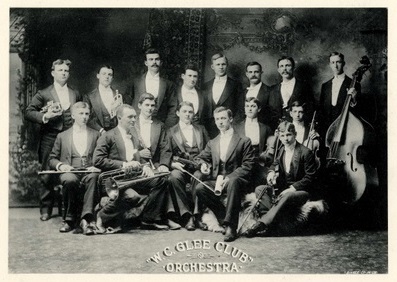 A choral group for men who enjoy singing, the Glee Club includes members from all academic disciplines. The Club's mission is the pursuit of excellence in the art of singing: the establishment of close friendships within the Glee Club enhances this excellence. The men of the Glee Club infuse dedication and spirit into the life of the organization and, in return, the music brings joy and inspiration to the lives of its members and to the Wabash College community by “spreading the fame of her honored name.”