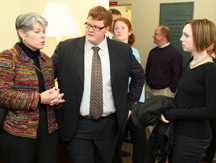 Rohrbacher, a Fort Wayne area artist, created the painting after learning of the death of Ken Rudolph in a tragic automobile accident. Titled "February 21, 2006, 12:30 a.m.," the oil painting was formally dedicated at an on-campus ceremony that included Ken's parents, Laura and Rhys, his sisters, and the artist.

The inspiration came from a tiny snapshot photograph taken at a Commencement party honoring the Class of 2005. Featured in the photo, taken by former Classics Professor Patrick Myers, are Jon Pactor ’71, Mark Shreve ’04, Myers' son, and Rudolph. Rohrbacher saw much more than Wabash friends celebrating Commencement and imagining the future. In her artist's statement, she writes: 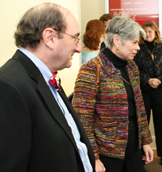 "Initially, I was drawn to the light. The light in the room was the kind of light I like to paint. The image made me pause because it captured Ken in such a thoughtful, contemplative moment. After Ken's death, I went back to that photo and saw so much more. I saw it being religiously symbolic. I labeled the three other people as the Father, Son, and Holy Spirit. The Father was holding the Son and the Holy Spirit was speaking to Ken. These labels could also be completely interchangeable at the same time. In a conversation with Patrick Myers, we discussed another way of looking at the painting. That in it, Ken seems to confront the three ages of a person: childhood, youth, and adulthood, and he is directly communicating with the age he never became. The painting was left 'unfinished,' an unfinished painting of an unfinished life. I painted this to honor the life of Ken Rudolph because he has touched my life and so many others."

Rudolph had a significant impact during his four years at Wabash. He re-organized the Wabash Commentary as its editor and reinvigorated the Commentary's speaker series, bringing to campus a half-dozen national figures including syndicated columnists Jonah Goldberg and Ann Coulter. Rudolph also spent a summer studying in Scotland, a profound experience that further shaped his young life.

Rudolph's family and friends have established the Kenneth Rhys Rudolph Memorial Fund for European Summer Study Abroad. The fund provides need-blind financial support for a student or students from Wabash who choose to study in a European country during the summer. It was established by his parents, Rhys and Laura, and his sisters, Kathryn and Lauren.