Our Student Newspaper, The Bachelor

The Student Voice of Wabash Since 1908

The Bachelor publishes each Friday during the school year. Issues can be viewed at https://issuu.com/wabash_college. In the paper, you will find all of the weekly and 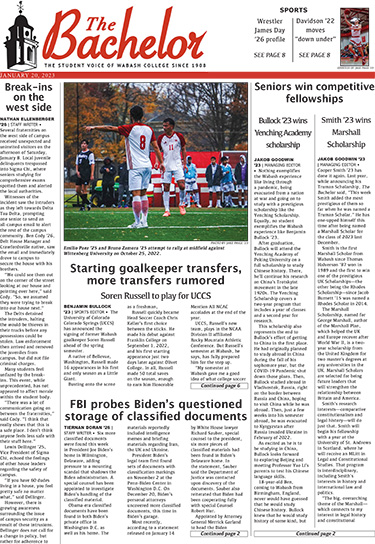 While Wabash may not offer Journalism classes, The Bachelor staff members prove in the best liberal arts tradition that there is no substitute for the experiences gained in working a beat, writing and publishing weekly, and engaging with the community. From reporting, to editing, to photography, The Bachelor staff does it all from August through May.

The Princeton Review included The Bachelor on its “Great College Newspapers” list in the Fall of 2021, marking the third consecutive year that Wabash's student-run newspaper was ranked inside the top 30 nationally.