All of Wabash came together Friday night to celebrate the College’s grandest traditions — the Glee Club, Homecoming, brotherhood, and philanthropy — and when the evening concluded, the College had successfully concluded the Challenge of Excellence campaign by topping $68 million.

The centerpiece of the evening was the announcement of the final total for the Challenge of Excellence campaign. Formally begun in October 2010, the campaign’s goal was $60 million by the end of 2013. Rising to the Challenge in typical Wabash fashion, the goal was exceeded a full year ahead of schedule.

“We knew in our heart of hearts that we could call on all of Wabash to rise to the need, to respond to the call, and reach higher for the good of the College,” said President Patrick White. “Wabash Always Fights and always means always. In good times and in bad, you and your families and Wabash men from literally around the globe, have stepped up and said,  ‘My College needs me.’ And out of gratitude, out of love, out of loyalty and the fine gentlemanly virtue of caring for the generations who will come after you, you have stepped up. And your generosity will make an enormous difference in the lives of Wabash men for years to come.”

President White also paid tribute to the Challenge of Excellence co-chairs, Allan Anderson ’65 and Ted Grossnickle ’73, both members of the Board of Trustees who led a vast and talented volunteer committee and seasoned Advancement staff in surpassing the goal ahead of schedule.

“I often use the word ‘investment’ in describing charitable contributions and philanthropy,” Grossnickle said. “You, our graduates and friends, are investors in the ongoing success of Wabash College. And, you are also investing in our future. Without you, and the generations before you, the education of young Wabash men and the work of our faculty, would not happen… The Challenge of Excellence was accomplished because of people. The fact that we, as a community, pulled together in a tough time economically, is a testament to the people associated with the College. For Wabash to have done this, not only on time but ahead of time, and exceeding our goal, is even more special.”

Club Director, Dr. Richard Bowen, directed the nearly 100-voice strong Alumni Glee Club for one number, while alumnus Eric Stark ’88, who is choral director and professor of music at Butler University, led the group in a rousing rendition of Old King Cole.

Former Club member Campbell Robbins ’09 introduced a video that charted the Glee Club’s glorious history of song by reflecting on his own experiences in the Glee Club — the camaraderie and travel. Robbins said the strong bonds he formed with other Wabash men in the Club were among his fondest memories, and the audience roared in laughter as he described the Club’s travels through Europe.

Robbins followed in his father Clay's footsteps to Wabash and the Glee Club, and both of his younger brothers, Peter and Luke, were members of the Glee Club.

Kilbane talked about the bonds of friendship that extended all across campus — from the football field to the Sphinx Club to Glee Club. He also honored the memory of his Wabash mentors and friends — Dave Harvey ’77, Evan Sobecki ’10, Jeff McLochlin ’83, Bill and Ginny Hays, and Fran and Barney Hollett.

Kilbane, too, introduced a video history that traced the history of Homecoming at Wabash to its roots in 1912.

Both videos were produced by Adam Bowen of the Wabash Media Center and researched by Archivist Beth Swift.

“On this festive night as we celebrate 180 years of Wabash history, of 100 years of Homecoming, and the 120-year tradition of the Glee Club, we best honor the past of Wabash when we look to our future,” concluded President White. 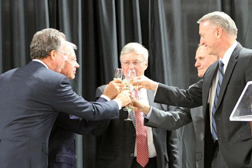 "At Wabash, no one walks the road to excellence alone. Each young man at Wabash who has the courage to say, ‘I will take my life seriously; I will be a hero in my own story,’ does so because you are all behind him and beside him. And tonight as we celebrate and as we look ahead let us remember: We do not yet know how great this College can be.  We do not know what excellence we can achieve together. The Challenge of Excellence campaign has concluded in proud and grand fashion, but the true Challenge of Excellence of Wabash continues forever.”