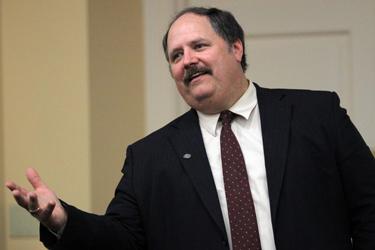 How could a man praised for his defense of the Jewish people during World War II by everyone from Franklin Roosevelt to Israeli Prime Minister Golda Meir become known as “Hitler’s Pope” 50 years later?

Ron Rychlak ’80 says it all began with a play.

Speaking to the Wabash community in Lovell Lecture Hall on Tuesday, Rychlak—professor of law and associate dean at the University of Mississippi and author of the newly revised and expanded Hitler, the War, and the Pope—documented what he called “a Soviet effort” to smear the reputation of Pope Pius XII, a disinformation campaign he calls “one of the most successful ever mounted against a world religious leader.”

That effort first met the public eye in the form of a play called “The Deputy,” Rychlak said, which premiered in a West Berlin theater that was built to spread pro-Soviet/anti-Western propaganda. The play then ran for a year on Broadway, and although historians called the play and program notes presented with it dubious, the drama raised the question of the Pope’s deportment during World War II.

The debate over the Pope’s conduct continued in John Cornwell’s controversial 1999 book Hitler’s Pope. The author criticized Pius for not speaking out or doing enough against the Holocaust, suggesting the Pope was anti-Semitic. Rychlak’s first edition of Hitler, War, and the Pope was a direct response to those allegations, with Rychlak given special access by the Vatican to closed sections of its archives for his research.

The author began his presentation Tuesday with a series of headlines and quotes that painted the pontiff as anything but anti-Semitic: words of thanks from Jewish leaders, and a New York Times article calling Pius “the lone voice” calling attention to the threat of Nazi Germany.

Then Rychlak revealed the most stunning evidence supporting the theory that “The Deputy” was a Soviet scheme to discredit Pius—in 2007, the highest ranking Soviet bloc officer ever to defect to the West revealed his part in plan.

“I thought it sounded fishy at first,” Rychlak said. “Then I started to doing the research.”

He found that after World War II, Communist regimes had convicted many religious leaders in show trials.

“It happened from place to place. They’d take well-known leaders and charge them with collaboration with the Nazis. Later, many of those who did this apologized and talked about it," Rychlak said providing several examples.

Drawing from his research, Rychlak noted how almost every person involved in producing, translating, and publishing “The Deputy” had close ties to the Communist Party. Many had ties to the KGB or its predecessor.

“’The Deputy’ was a Kremlin plot, part of a plan to discredit the West,” Rychlak said. And such new evidence required the revision and updating of his book, which came out last May.

“Everyone during his life and at the time of his death recognized Pope Pius as a strong supporter of the Jews and the strong opponent of the Nazis,” Rychlak said, noting that the Vatican had sheltered groups the Nazis were persecuting, and Pius had put his own life in danger.

Yet one play, Rychlak writes, “reshaped Pius XII’s reputation so that it is now an axiom of popular culture that he was, at the very least, guilty of criminal cowardice and insensitivity in the face of the Holocaust.

“It was not well documented at all, but it was enough to raise the issue and start the debate. Amazing that a fictional play changed people’s perceptions—that was the power of fictionalizing it.” 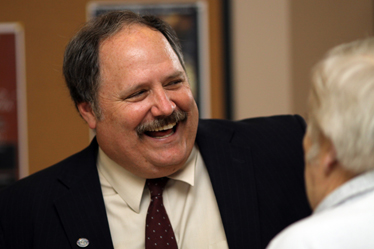 The first edition of Hitler, the War, and the Pope proved the beginning of 10 years of work well outside his “day job” as a professor of law and associate dean, although his legal scholar’s skills as a meticulous researcher are what set him apart from other writers on the subject. Rychlak also serves as an advisor to the Vatican’s delegation to the United Nations.

“I’ve been doing this for 10 years now, and my work with the UN sprang directly from that first book,” said Rychlak, who was an economics major at Wabash. He noted that he had taken more classes in Lovell Lecture Hall, where he spoke on Tuesday, than in any other classroom on campus. He said he was especially grateful that two of his former professors—Professors Jim Barnes and Joe O’Rourke—attended the talk.

Rychlak gave a second presentation late Tuesday afternoon about his work as advisor to the Vatican's UN delegation. He also writes regularly for InsideCatholic.com and he is a panelist for the Washington Post's "On Religion" page. A devout Catholic, he said he finds the research and work he does for the Church especially rewarding.

“It’s taken me places I would never have imagined,” Rychlak said.