When South African runner Caster Semenya won the gold in the 800 meters at the 2009 World Championship last August, onlookers asked a lot of questions.

Dr. John Sloop was one of those people. 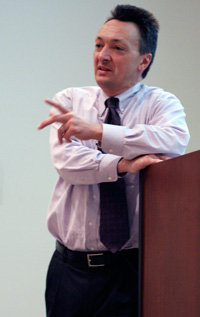 He is a Professor of Communication Studies and the Association Dean for the College of Arts and Sciences at Vanderbilt. Monday night, he presented his research to a large crowd in Baxter 101 on the competing discourses of race and gender that emerged during the Caster Semenya affair as the 2010 Brigance Forum Lecturer.
“As I read the news surrounding this case I could not help but reflect on a phrase very well known to many educated loosely in the area of rhetorical and cultural studies in the last 20 years or so,” he said. “To wit, Dewey’s observation: Of all things communicating is the most wonderful. It is through this analysis of this discourse surrounding this case that we see most profoundly the reason which communication is in fact the most wonderful of things. It…creates.”
Dr. Sloop explored the way the media, including interviews, news articles, and blog posts, mediated identity and gave voice of various discourses about gender and race in the wake of the questions about Simonyi’s gender and reactions to them after her successful showing last year at the World Championship.
Semenya was known internationally for her dramatic improvements in speed, but, after her 2009 success, some international officials demanded a gender verification test be performed.
Sloop looked at the different discourses that emerged during this time.
He was drawn by the competing discourses about what he calls gender Some, like those from countries whose runner lost to Semenya, namely Australia, interpreted her speed and strength as a runner to be a marker inconsistent with conceptions of femaleness.
Semenya was found to have higher testosterone than the average female, and this too was used as evidence that she was male. 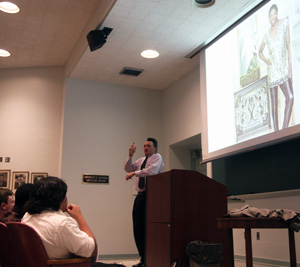 Even still, there were those who interpreted her family’s and friend’s description of her preferences for pants, for playing football, and her boyish features as evidence that she was male.
Sloop found it interesting that there were those who accepted these biological, visual, and cultural descriptions of Semenya, and still argued that she is a female.
Sloop shared other scholars’ work on what he called the gray area of gender. He quoted a New York Times interview with a gender scholar show said, “Sex is so messy that in the end these doctors are not going to be able to run a test that will answer the question. Science can and will inform their decision, but they are going to have to decide which of the dozens characters of sex matters to them. Their decision will be like the consensus regarding how many points are awarded for a touch down or a field goal. It’s going to be a sports decision not a natural one about how we choose the play the game of sex.”
Sloop found the topic so interesting because there were so many discourses emerging from the situation, relating not just to gender, but race and nationalism. He argued the fact that this was an international competition and that Semenya won it is much of the reason these discourses emerged. He also believes there is more to come on Semenya.
“Given the very recent news that she has announced that Caster Semenya plans to resume her careen on the international circuit, we are at a moment in which we will be seeing gender done and undone,” he said. “Despite having allowed Semenya to keep the gold medal and the flag money the IAAF never released the results of its tests. Simonyi’s decision last week to push the IAAF to make a decision and how they have determined gender should” show how gender matters and how communication will shape how people talk about it. 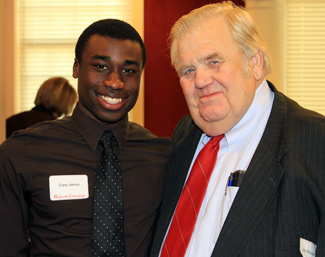 “I was thrilled with the attendance, and I think it perhaps indicates the level of interest in questions around race and gender on campus and speaks to exciting things happening in classrooms,” said Associate Professor of Rhetoric and Department Chair Jennifer Abbott, who organized the event. “I found the talk fascinating because it shows evidence that there is room for alternative ways of thinking about gender and discourses that are more disruptive of those gender norms.”
Dr. Sloop will spend the rest of his time on campus meeting with faculty and students during meals and in Rhetoric and English classes.

UPDATE: The Rhetoric Department holds an annual dinner prior to the Brigance Forum each year. They honor students for their achievement. Gary James was named winner of the Joe O'Rourke Award as Rhetoric's Top Graduating Senior.