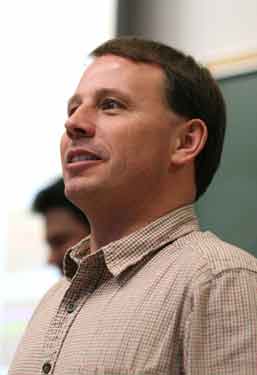 At Wabash, strong research means even stronger teaching, and you'll find few better examples of both than the work of Scott Feller.

The professor of chemistry has received a grant of approximately $500,000 from the National Science Foundation (NSF) to fund his continuing research on the interactions between the molecules that comprise cell membranes and to provide support for the Wabash students conducting that work alongside him.

The half-million dollar award renews a grant that has been the springboard to graduate school for more than a dozen Wabash students and has bolstered the reputations of Feller and Wabash in scientific and pedagogical circles. The series of grants has also paid for the continuous expansion of the Little Giant parallel supercomputer required for the atomic level molecular modeling that makes Feller’s research possible.

When the new grant is completed, Feller will have received NSF funding for all 17 years of this line of research, which has been used by scientists studying dementia and mood disorders, lifespan, inflammatory diseases, immunology, and even the behavior of simple organisms. His work has also gained the attention of pharmaceutical companies, nutritionists, and even a baby formula manufacturer.

“The most successful project that has come out of this grant to date has been with the Omega-3 fatty acids, which are positively implicated in health studies,” Feller explained. “Our research has developed a new picture of what Omega-3 fatty acids look like at the molecular level, and scientists in the nutrition field are finding that useful. I get requests for reprints and images from nutritionists, and was invited to speak at the company that makes most of the baby formula.

“We also have a paper in the Journal of Biological Chemistry that looks at an Omega-3 fatty acid that is a signaling molecule important to the nervous system, how it could be involved not just as a constituent in cell membranes, but as a regulator of biological processes.”

With the renewal of the NSF grant, Feller and his students will also model and study cell membranes containing the protein rhodopsin, whose activation is the key first step in the vision process, as well as polyunsaturated phospholipids that have been identified in previous experimental studies as key to the development of visual acuity. The model system under study will also be expanded to include other potentially important membrane constituents such as cholesterol and vitamin E. 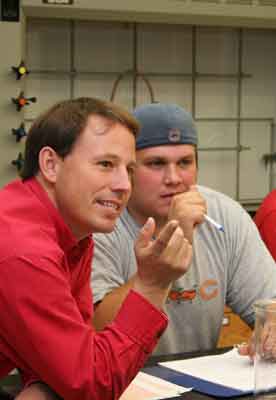 “The awarding of a major NSF grant to Scott Feller is a public acknowledgement of his continuing prominence as a scholar of national and international reputation,” said Dean of the College Gary Phillips. “He has received continuous NSF support for his teaching and scholarship for more than fifteen years, no insignificant feat. You earn such support by scholarship and teaching that is recognized for its quality and impact. Recipient of the McLain-McTurnan-Arnold Award for Excellence in Teaching, with publications widely and frequently cited by chemists and biophysicists, Scott is an intellectual leader of the community who models what it means to be scholar/teacher to all Wabash faculty.”

Feller says this area of research continues to fascinate him, in part because of the daily interaction with his student co-researchers. The cutting-edge work gives students an opportunity to be research scientists alongside Feller, and they may encounter obstacles their professor doesn’t know the answer to.

“Those moments, when a student realizes he has figured out something that maybe nobody knows, are the real benefit of research for students,” Feller said. “On my chalkboard every day there’s a new problem. My intern Mike Lu ’12 comes to my office every day for us to talk about something new, or some challenge we’re trying to overcome.”

In addition to providing stipends to Feller’s interns, the research offers the rare opportunity for undergraduates to publish in journals and present at national conferences. Feller’s intern Xingcheng Liu ’10 recently presented the research at the American Chemical Society’s national meeting in San Francisco.

Feller added that while he’s excited about the grant renewal, his role as chair of Division One, which includes biology, chemistry, physics, and mathematics, evokes even more enthusiasm.

“One of the things I’m proud of as Division Chair is that we have an NSF grant in every department. Mathematics has the Algebra Institute; Jim Brown in physics has the MoNa [Modular Neutron Array]; Amanda Ingram has her study of chloridoid grasses. We’re a pretty small place, yet we have NSF funding for all our departments in a time of tight funding in Washington. I’m even more excited about that than I am about my own grant right now.”