Deonte “DJ” Singfield ’11 recalled his first days on campus when he contemplated his goals for college and who he would like to become at Wabash. As he gave his Commencement address four year later, he asked his graduating classmates: Who have we become? What are our next steps? At the MXIBS 50th Reunion, his challenge to the generations of alumni was the same: What now?

When DJ Singfield ’11 was a student, he liked to be heard—at sporting events, telling jokes, or trying to get his friends’ attention. His football teammates probably remember him most as the guy who ran around yelling “DING DING!” throughout practices the week of his senior Monon Bell game.

It was at that game the 7–2 Little Giants met the 9–0 Tigers. Wabash ran away with a 47–0 victory to keep the Bell and thwart DePauw’s momentum heading into the playoffs. Singfield had nine tackles that day.

“DING DING! wasn’t just an attempt to get everyone jacked up for the game—it went far beyond that,” he said in his Commencement address. “It was a commitment that stretches beyond any obstacle and outweighed any doubt. It was a reminder of the goals we had set. It meant no regrets. It was a motivation to give everything every day, even when I didn’t want to because I knew there were too many people counting on us.” 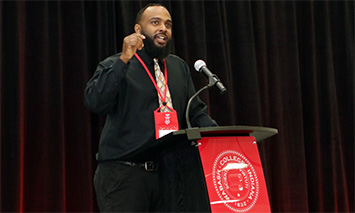 For that week, for that team, the motivation was the Bell. But Singfield recognized that DING DING! varied for each person during different points in their lives. Maybe it was getting into a program or course, earning and keeping a scholarship, achieving distinction on comprehensive exams, or accepting placement in graduate school or a new job.

“DING DING! is more than a sports victory, academic success, or a personal achievement,” Singfield said. “DING DING! represents a way of life. It stands for Wabash pride and the expectation to reach our full potential.

“We’ve been motivated to become our best at whatever we do,” he continued in his 2011 speech. “We will never forget all the great accomplishments and the great memories. But now that we are graduating, does it end? Absolutely not! We have a duty, a responsibility to fulfill, a challenge to meet head on. I urge us all to live lives of leadership.”

Fast forward 11 years to the Malcolm X Institute of Black Studies 50th Reunion celebration (held two years late due to COVID-19), where Singfield was again on stage giving an address—this time to alumni spanning the 50-plus years since the Institiute’s founding.

In preparation for his remarks, he thought about the challenge he issued to his class. He realized he wasn’t as connected. But that could change.

“The challenge is practical and personal,” Singfield says, now a teacher and coach at Lawrence North High School in Indianapolis. “Wabash guys have to come back and get involved. We’ve got to be face-to-face. We’ve got to be in the same room. We have to find a way to connect.”

Gathering together in the same room at the reunion in April rekindled memories of late-nights in the MXIBS, but it also served to refocus the alumni around the immediate needs of the students and to building something more lasting.

“All the people in this room are part of the fabric of the MXIBS,” he says. “There’s a history that ignited a movement on the campus because of some of the hardships that brothers were enduring. In 50 years, we’ve made some incredible strides.”

“We have to remember the commitment can’t stop once we graduate. If you have more and you’re not giving it, especially for your brothers, what really are you doing? All that stuff doesn’t really mean anything if we can’t give it to the next person,” he explained.

“If we are committed to and carrying ourselves as Wabash men for years to come, that has to impact the way we think about what we gained from our shared experiences, both when we were students and as alumni now,” he says.

“Thinking about the connections between us and seeing them here again this weekend has changed the way I consider myself as an alum,” he says. “There is a love in this room so deep and pure. It reminds me how truly special Wabash is, and it gives me new energy.”

The closing words of Singfield’s Commencement address are as meaningful to him now as they were when he spoke them in 2011.

“We are all from different walks of life, and have different aspirations and goals we want to achieve. One thing we will always have in common, though, is at the core we are Wabash men,” he said. “This means we are called to stand for something greater than ourselves, to overcome obstacles many wouldn’t even attempt, and to dream bigger than anyone can imagine.”