There was something special about Wabash College that made Jim Dimos ’83 light up every time he returned to campus.

His wife Kathy remembers watching her husband bring their three children with him as he cheered from sidelines for the Little Giant football and basketball teams. She remembers the hours of volunteer work he put in as a class agent, and his commitment to helping connect alumni to their alma mater. She remembers the excitement he had when he got to visit classrooms and mentor students who were interested in pursuing a career in law. 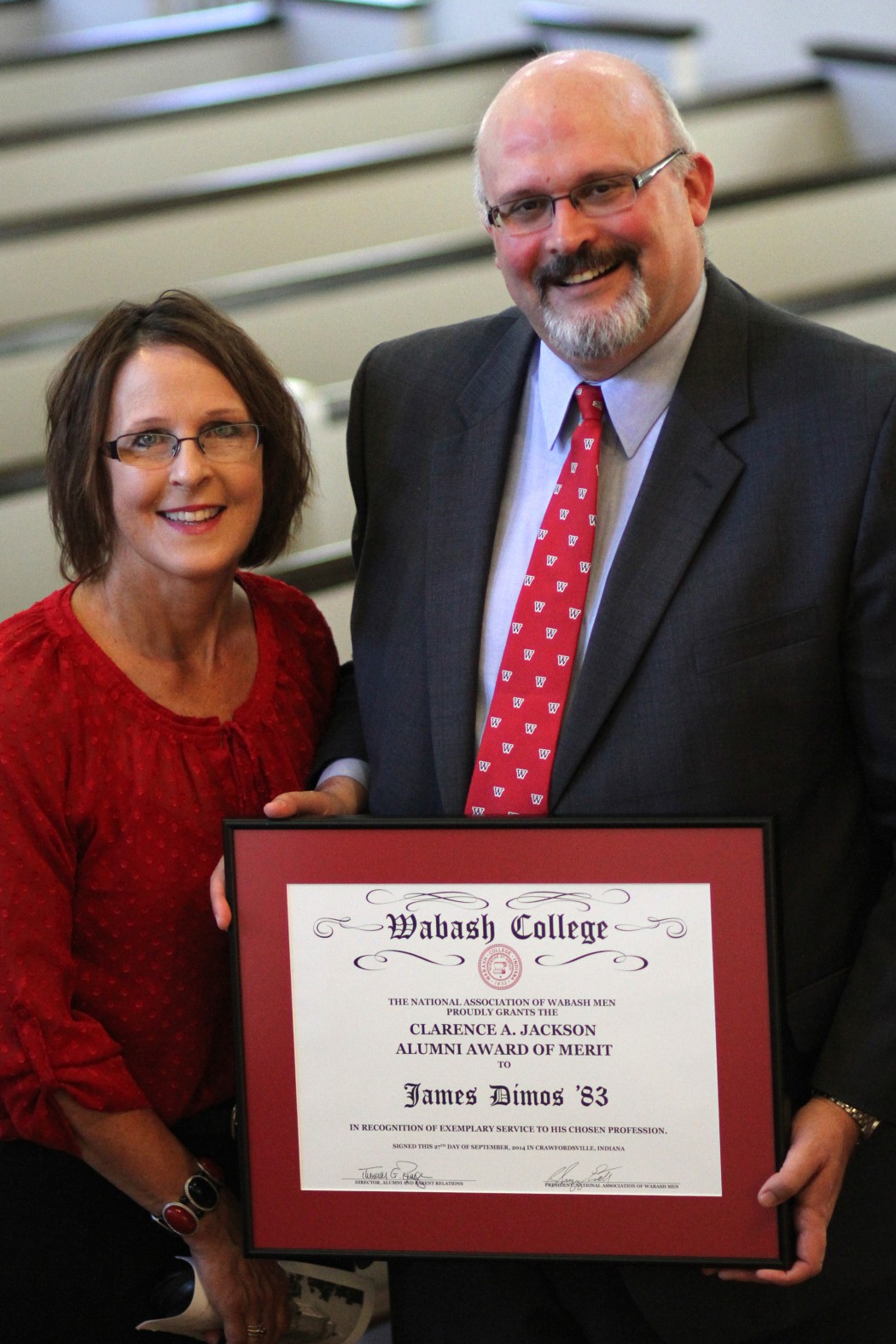 “Jim gave his heart and soul to the College for nothing in return,” said Kathy, who was married to the Wabash alumnus for 30 years.

He served in private practice for almost 30 years with Locke Reynolds LLP and Frost Brown Todd, focusing on the litigation needs of the business community in the areas of intellectual property, competition, and media law. He then joined the American Bar Association (ABA) as deputy executive director and later assumed the role of general counsel. He also served as president of both the Indiana State Bar Association and Indianapolis Bar Association, and as a member of the Indiana Supreme Court’s Pro Bono Commission.

“He always said Wabash creates successful young men to go out into the world and excel in their careers and personal lives,” Kathy said. “That’s why, years after graduating, he was constantly involved, so drawn to give back in any way that he could.”

After their youngest child graduated from college, Kathy and Jim discussed their future and what they could do to repay Wabash. The two agreed on a planned gift to name Wabash College as a beneficiary in Jim’s life insurance policy.

Less than a month after their conversation, on Aug. 5, 2020, Jim died unexpectedly.

“He did a lot with current students and young alumni, wanting to serve as a mentor,” Kathy said. “Before he passed away, Jim was planning to meet with a Wabash student who was interested in exploring law. That’s what mattered to him.”

Castanias described Jim as a “selfless servant” who could “make strangers feel like they were the most important people in the world.”

“We had a kindred bond as Greek boys who grew up in the restaurant business but looked to a Wabash education and the law to try to raise ourselves up a peg, only to find that we had chosen not just a job, or a mere career, but a true calling of service,” Castanias wrote in a tribute in a previous issue of Wabash Magazine.

“I’ve never been of slight stature, but Jim always made me feel tiny. Yet Jim would never make anyone feel small,” Castanias said. “As the ABA’s executive director said, ‘We are devastated by the loss of Jim Dimos. He was a big man with a great vision and huge accomplishments.’”

After his passing, Dean for College Advancement Michelle Janssen contacted Kathy with an idea. To honor Jim’s legacy, the College asked to use the proceeds from the life insurance policy to reserve naming rights for the new broadcast booth within Little Giant Stadium.

Kathy and the rest of the Dimos family loved the idea and agreed to the naming opportunity as part of the stadium project. 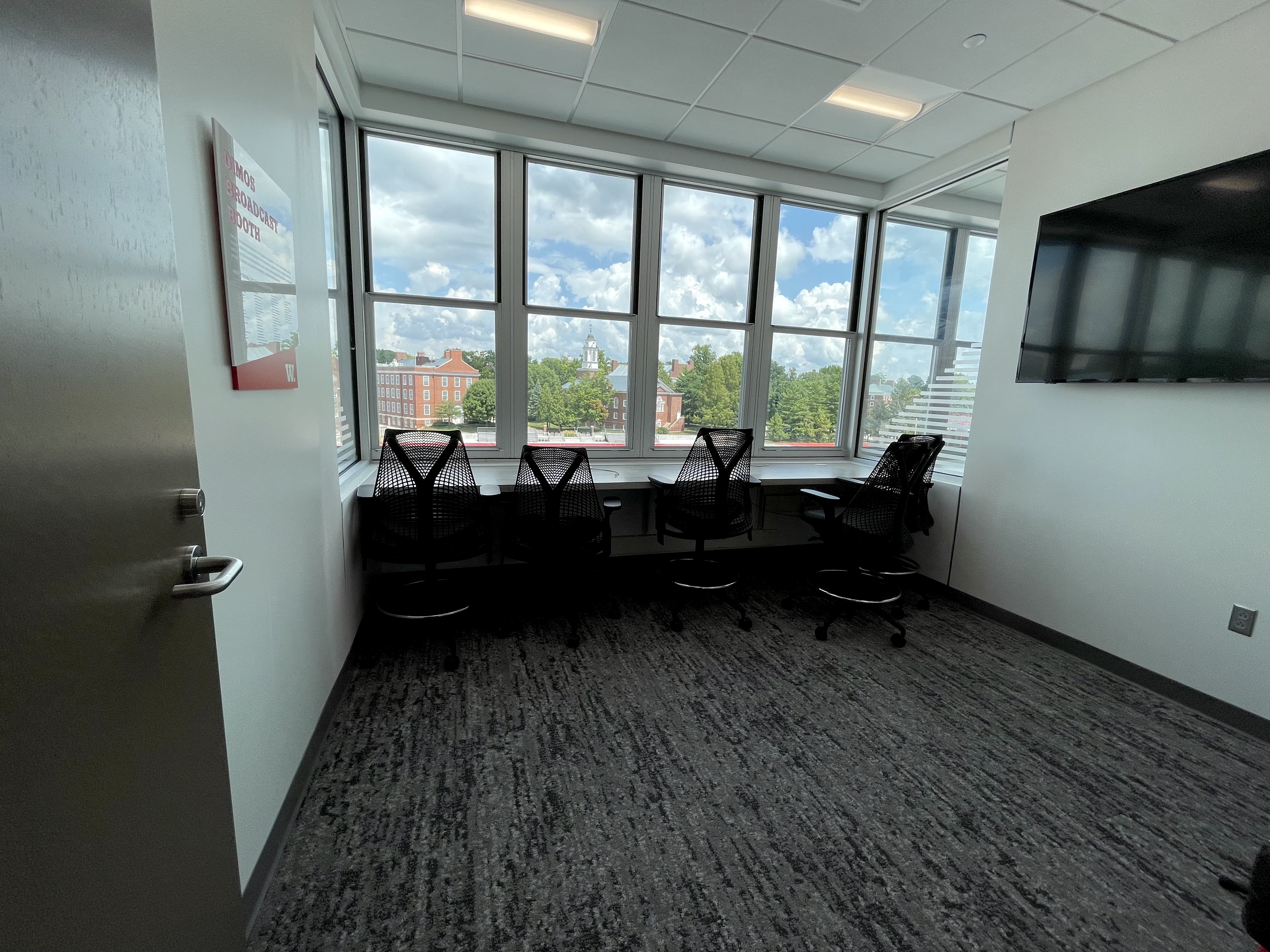 “Jim talked all the time about how he was the broadcaster when he was at Wabash. Really, that was his first love,” Kathy said with a laugh. “If he wasn’t a lawyer, he said he would have been a broadcaster.”

Kathy and two of her children returned to campus last fall for the stadium dedication. She was excited to see the new stadium completed and interact with all who supported the project and the celebration of Jim’s legacy.

“I can’t adequately explain the enthusiasm he had for Wabash. He was so excited for that new stadium and talked about it all the time,” Kathy said. “We’re sad that he wasn’t there to see it, but we’re thankful he is memorialized and will be there forever.”