Alejandro Reyna ’17 can now add his name to that list. 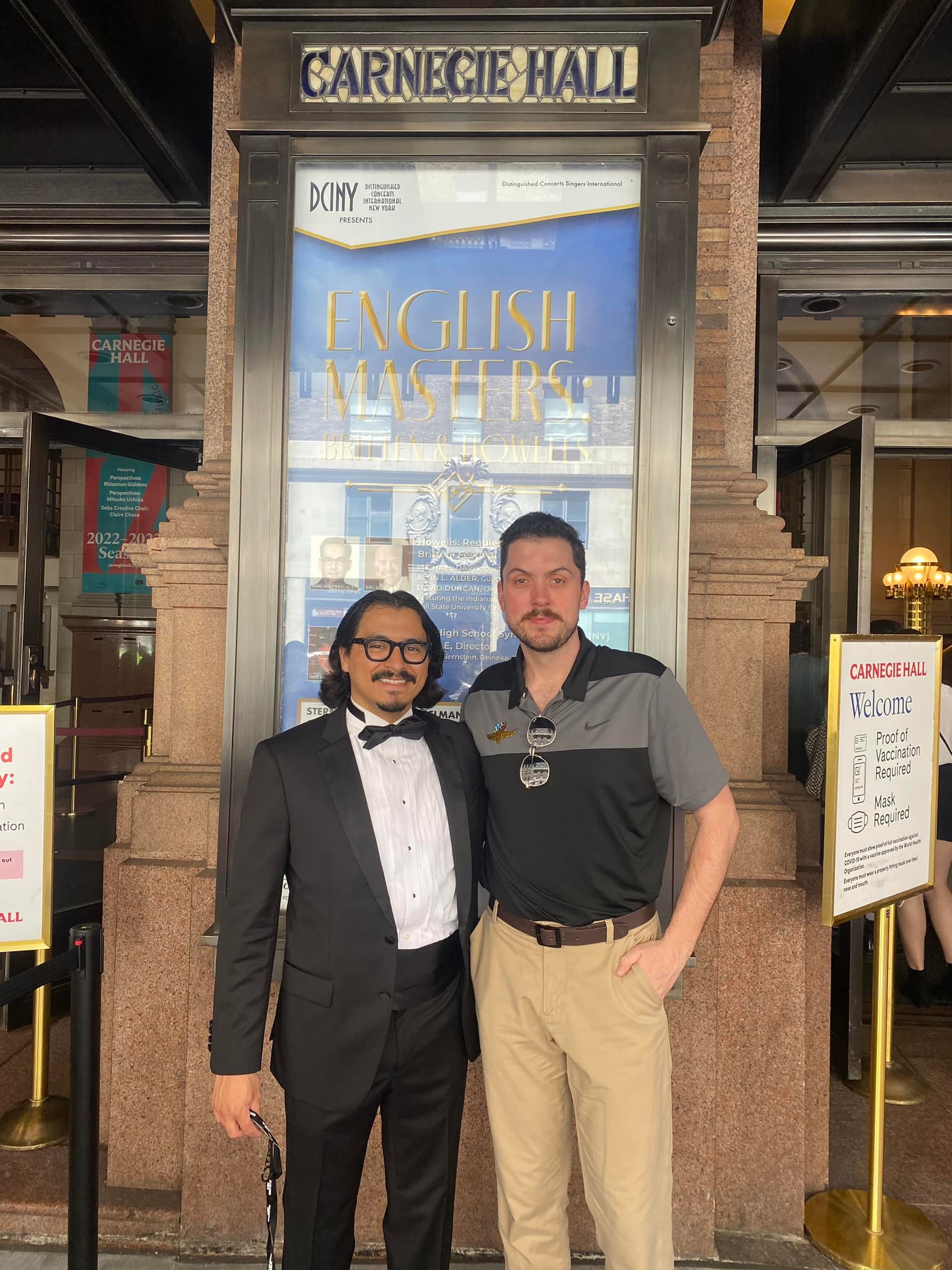 “Making music is such a privilege,” Reyna said. “Doing it with 92 other amazing individuals of the Indianapolis Symphonic Choir and Ball State University Singers at Carnegie Hall made it that much more meaningful.”

Reyna is an ISC conducting fellow, currently pursuing a master’s degree in music at Butler University with a dual focus on choral conducting and voice performance.

The conducting fellowship, a collaborative initiative between the ISC and Butler, provides Reyna with full-tuition and a stipend. As part of the two-year fellowship, the Wabash alumnus has been able to participate in all aspects of the choir’s activities, from staff meetings, auditions and rehearsals, performances, and working with soloists and other conductors.

Reyna said singing in Carnegie Hall has been one his greatest accomplishments as a performer.

“Many of my favorite artists from different genres have performed in Carnegie Hall. As I was walking through the hallways, I was surrounded by posters from the 1900s that featured singers like Ella Fitzgerald and Fats Domino. I have done lots of productions and performances before, but nothing compared to that feeling,” Reyna said. “Walking on the stage, everything about it is just so gorgeous — the history and the sound that filled the space. It’s acoustically perfect.”

Reyna said he usually doesn’t get nervous during choral performances. Having the other singers around him brings comfort and feels like “you’re singing with family.”

But Carnegie Hall was different. For the first time as a soloist, Reyna had to theatrically step out from the choir and position himself to be front and center under the spotlight. 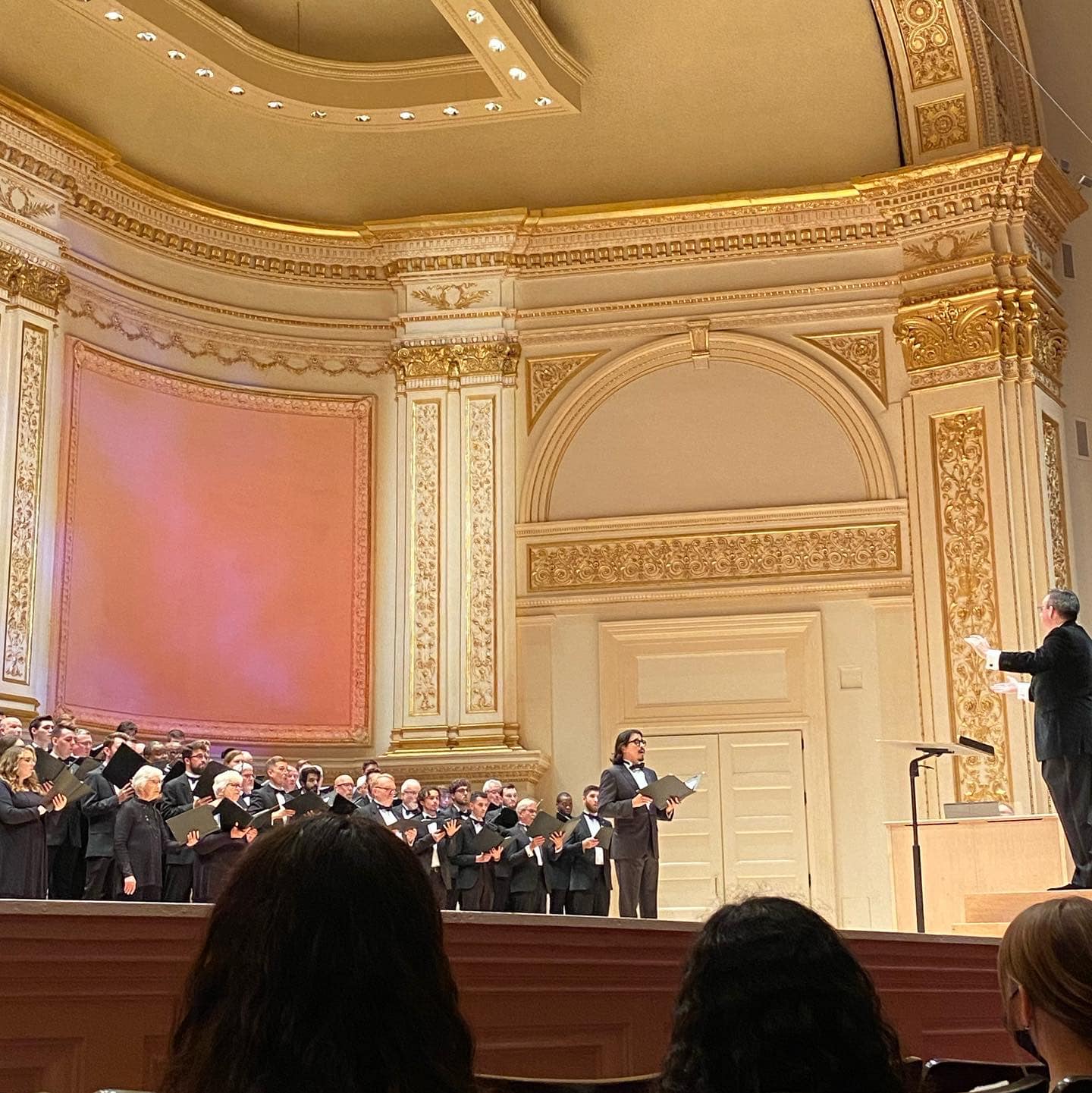 “When I started singing, I could feel my heart start to race and I look over at my conductor who is making a face. He was just conducting, but I read into it and blacked out for a moment. I was halfway through thinking, ‘wait, do I know the words,’ and then it was over and I did perfectly fine,” Reyna said with a chuckle. “It’s just hard to try not to overthink a performance like that, especially when you are doing it solo and have to carry the drama. That can be really tough.

“I’m proud of the performance, and was thankful to have some of my friends and advisor in the crowd watching,” Reyna said. “It was such an honor to perform in that space and to be able to make beautiful music.”

Eric Stark ’88 is the director of choral activities and professor of music at Butler and the artistic director of the ISC. Stark has gotten to know Reyna very well over the last two years as a fellow, and said it was a special joy to witness him in his first performance at New York’s famed Carnegie Hall.

“Singing both as part of the chorus, and also as a featured soloist, Alejandro’s talent and training proved most worthy of the prestige of the venue,” Stark said. “His vocal solo garnered a special mention from the local press in its published review, and gave us one more reason to be very proud of him!”

Singing and performing has always been a part of Reyna’s life. At Wabash, the music composition major and Spanish minor was a member of the Glee Club and jazz ensemble, and involved in multiple theatre productions, including The Glass Menagerie.

After graduation, Reyna worked as a senior fellow for the Center for Innovation, Business and Entrepreneurship.

“I thought I wanted to do consulting and management, and that’s what I did for three years at Wabash,” Reyna said. “I enjoyed working with students, but I felt more passionate about teaching and never gave up on music. I had a couple of music mentors and thought this could be my career.”

Reyna joined the ISC in 2020 at the height of the pandemic.

As choirs everywhere were reeling from the effects the pandemic, Stark said Reyna was very valuable to the choir and helped the group craft a new vision for its work and singing together, one that was almost exclusively online for many months. 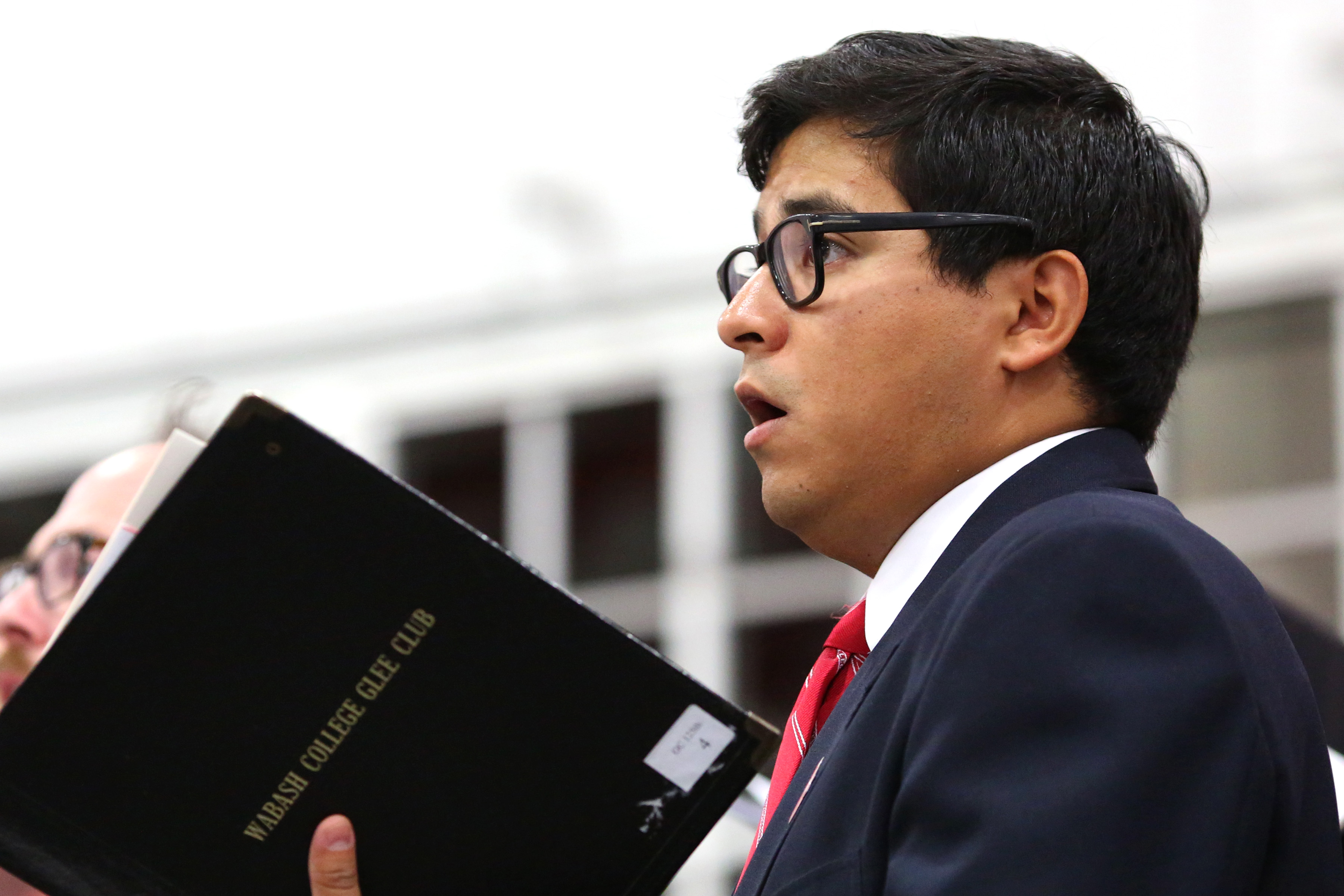 “With Alejandro’s expertise, the 100+ members of the ISC continued to feel a strong connection to one another,” Stark said. “Although singing at home into their iPhones, Alejandro’s presence and constant attention reminded all of us that we were part of a larger team.

“As a Wabash alum myself, I have been particularly proud to see how Alejandro has provided a high level of talented leadership, dedication, and support in his role as ISC conducting fellow, just as he has shown the same in his master’s degree work at Butler,” Stark said. “Alejandro has a very bright future indeed, as a musician, an educator, an artist, and as a human.”

This year wraps up Reyna’s conducting fellowship and time at Butler. He’s now focused on his final recital and exit exams, which he feels well prepared for since “Wabash’s comps put me through the ringer for a week-and-a-half.”

Reyna will be joining the Seraphic Fire’s Professional Choral Institute at the Aspen Music Festival and School in Aspen, Colorado, in August. He will participate in intensive performance and masterclass programs designed for singers and choral conductors to prepare them to work in the professional choral music industry.

“I really enjoy performing as a singer, and this program will give me an amazing opportunity to learn a lot and get more experience under my belt,” said Reyna, who plans to eventually move back home and look for job opportunities in Houston, Texas.

“As a performer, you’ve got to keep your eyes open and be ready to say yes,” Reyna said. “That’s how I got to Carnegie Hall. I look forward to what the future has in store for me in music.”