“He's Got That Teacher Bug”

Devin Vanyo ’22 has always loved mathematics—so much so that he was taking advanced pre-algebra by sixth grade. He always thought that passion would turn into a career. After studying abroad in Budapest, Vanyo realized he might want something else, and that it’s OK to not know exactly where he’ll end up after graduation.

There was a lot that attracted Devin Vanyo, from Cuyahoga Falls, Ohio, to Wabash College—the beautiful campus, rigorous academics, athletic opportunities. But what got him most excited about the liberal arts institution was its students.

“I found my people,” says the Lilly Scholar. It was the first time the math major and religion and Greek double minor felt like he didn’t stand out as “the smart kid,” but fit in with others who understood his analytical way of thinking.

“Coming into college, I was thrilled because there were people who I could actually talk with about math,” Vanyo continues. “I could just keep going deeper and deeper, and they would keep going with me. It was amazing!” 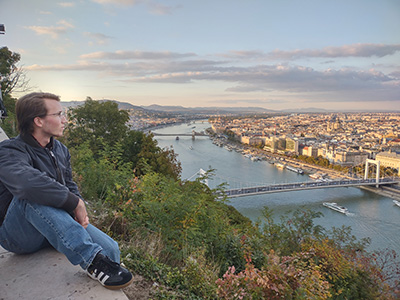 Vanyo has distinguished himself at Wabash through a variety of campus leadership roles and academic achievements. He serves as a consultant in the Wabash Writing Center, is a member of the tennis team, participates in Moot Court, and is the former president of the math club.

“Devin is one of the finest students I’ve ever taught,” says Colin McKinney, associate professor of mathematics and computer science. “When I first met him as a high school senior, we started talking and he mentioned he was taking math classes at a university near where he lives.

“It became very clear this kid seriously knows his stuff—and that’s just not mathematically. He took Greek. He wrote a paper for a class that he submitted to a classics journal on an obscure and poorly understood part of ancient Greek grammar,” McKinney continues. “If you look liberal arts up in a dictionary, you might see a picture of Devin Vanyo.”

Head Tennis Coach Daniel Bickett says Vanyo is a phenomenal athlete and leader on and off the court. His teammates all look up to him.

“It’s more than just his athletic ability,” says Bickett. “When I put together a drill, there’s a certain aspect that we’re working on. Devin is the one person that will constantly focus on that one aspect and get it perfect almost every time. He’s the one I’m able to point to and say, ‘He’s doing a great job. We all need to try and be a little bit more like Devin.’”

Vanyo is a goal-oriented person who’s always had a plan. Coming out of high school, he thought getting through college and then earning a PhD in math “just made the most sense.”

As he continued taking more math classes, conducting more research through summer internships, and meeting more professionals within the mathematics community, he started questioning whether following that career path would bring him the most happiness.

“I don’t think I want to be a mathematician,” Vanyo says. “And that uncertainty is really, really scary. When people see me, they see me as a mathematician. That’s always been my thing. And now I’m trying to do something unexpected. Breaking that mold is not easy.”

Vanyo studied abroad last semester in Hungary as a Gilman Scholar. He joined the Budapest Semesters in Mathematics, one of the most prestigious study-abroad programs for undergraduate students in the world.

Not only did he get to enroll in graduate school–level math courses, but he also got the chance to participate in a sister program that focuses on the learning and teaching of secondary mathematics. Vanyo visited multiple schools and got to explore Hungarian pedagogy, which places an emphasis on problem-solving, mathematical creativity, and communication.

“Watching teachers engage with students was really eye-opening,” says Vanyo. “The level of content awareness the teachers had, at a middle and high school level, was amazing. They could just talk in math. They were completely fluent in the discourse, as well as the emotional and social aspects that go into running an open, welcoming classroom.”

Vanyo got to step into a teacher’s shoes, and had the opportunity to lead a 45-minute math lesson.

“I really loved working with the kids,” says Vanyo. “There was something really rewarding about seeing all those light bulb moments when the math problem finally clicked and they were able to find the answer.”

McKinney says Vanyo would be a great educator one day, if that’s the path he chooses.

“He’s very good at being able to explain and communicate, not just mathematics, but anything else. His ability and knack for explaining things to others is another reason why I say he’s destined to become a professor,” says McKinney. “He’s got that teacher bug.”

Vanyo says studying abroad in Budapest was a blessing for him on his journey of figuring out what’s next. Being put in a different environment, with different ways of educating and thinking, opened up opportunities for him that he never thought about exploring.

“It was astounding to witness how, systemically, the way educational institutions are set up in Hungary compared to the United States are drastically different,” says Vanyo. “Here, you often hear about schools doing away with gifted programs in math education. There, it’s more of an emphasis on extended learning opportunities and challenging students who have mastered the basic curriculum. They’re encouraged to advance.”

“These kids were surrounded by other students who were just like them. They all got excited talking math,” says Vanyo. “It was cool and encouraging to see that level of community for people like me—something I didn’t really have when I was that age.

“I think I would really enjoy being a teacher in that kind of system.”

Vanyo is focusing on balancing his last semester at Wabash. While finishing his classes and extracurriculars, he’s also making more of an effort to pause and “listen to myself and my own personal needs.”

He may apply to join the Peace Corps, spend some time doing more traveling, or ultimately decide to further his education and training after graduation. Thanks to his diligent work up to this point, he has plenty of options.

“I’ve always loaded myself up and worked really, really hard. All of that has paid off, and I’ve been blessed with great opportunities because of it,” says Vanyo. “But I need to take time for myself, too. It’s a lot less professionally sexy or glamorous, but I think it’s important right now in my journey.

“My identity isn’t professionally determined, and after spending time in Budapest and reflecting, I’ve come to realize that’s OK. I feel like there’s a lot that I am still able to do, and I have hope I’ll figure it out.”