Kenny Coleman ’22 didn’t want to come to Wabash. But persistence by the coaching staff paid off and the College is a better place because of him.

“It was evident to me throughout the recruiting process that Kenny was supposed to be at Wabash—based on his work ethic, his personality, and his maturity at that age. He just didn’t know it yet,” says Olmy Olmstead ’04, the football coach who began recruiting Coleman. “It was quite a hard sell, too.”

One difficulty for the Muncie Central High School graduate was transitioning from a diverse school system to a place where he is more of a minority, and has experienced racism and acts of discrimination. 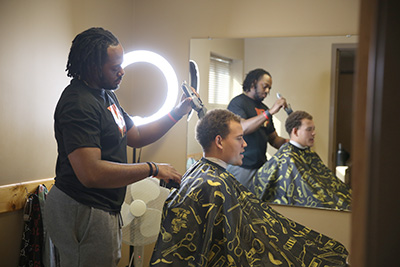 “Kenny has always carried the additional weight that Black students must bear on predominately white campuses, like at Wabash,” says Sabrina Thomas, associate professor of history.

Coleman turned that weight into a podium to speak out for diversity, equity, and inclusion.

“I was really closed off and reserved as a freshman, even a little bit as a sophomore,” says the rhetoric major and Black studies minor. “But taking more and more rhetoric classes changed the way I look at the conversation. I’m not going to be passive in terms of how I feel. If I say something, I’m going to really say it.

“When it comes to racism, I’m more inclined to speak up and speak out, even if it offends people,” he continues. “At the end of the day, you can’t be scared to step on toes. This is going to happen when the room is crowded.”

Coleman has proven himself as a leader on campus. In Spring 2021, Coleman was awarded the Lewis Salter Memorial Award given to a member of the junior class who best exemplifies the characteristics of scholarship, character, leadership, and service of former faculty member and Wabash’s 12th president, Lewis Salter H’57.

“As a Black man and leader of the MXIBS Brotherhood,” said Thomas in Coleman’s Salter Award nomination, “Kenny continues to temper the emotions and pain that currently define race relations in America, in Crawfordsville, and at Wabash College, with thoughtful and patient action—including a willingness to discuss these issues with his white peers even when they are the source of some of the pain.”

Last Fall, Coleman was awarded an Orr Fellowship. After graduation he will be working at Genesys, a tech-based company that specializes in creating software that helps businesses create a better customer service experience.

“Getting the fellowship is something I couldn’t have done without Wabash,” Coleman says. “I hope that being a fellow enables me to open the door for other students of color at Wabash to explore and better themselves.”

The football and track and field athlete has also emerged as a strong and trusted voice in diversity, equity, and inclusion on the field, around Wabash, and in the Crawfordsville community. He has been an integral part of the Malcolm X Institute of Black Studies (MXIBS) on campus, holding leadership positions all four years, including serving as chairman as a junior. He also served on the mayor’s special commission for racial equality and justice. He is passionate about helping people solve problems and being a resource for other Black students.

“There are a lot of people to talk to about how you’re feeling or about the things you’ve experienced as a student here, but not a lot of people who actually understand from [the Black] point of view,” says Coleman. “A big issue is finding connections where we can actually talk and feel like we’re being heard, not more like we’re informing somebody.”

What started off as just a way for Coleman to make a little extra money while in school has proven to be the perfect outlet for creating an open space where fellow Black students feel like someone is listening.

“I love cutting hair. I picked it up in high school helping cut my little brothers’ hair,” he says. “But once I got here, it hit a new level.

“I am sharing a space with someone, where they’re completely vulnerable, they’re trusting me with their hair, which for some people is a really big deal. I know it is for me,” Coleman continues. “The fact that the person trusts me, they’re open to talk about whatever it is in their life that’s bothering them—it’s almost like a sanctuary, or even like an altar where they’re just pouring out themselves.”

Perhaps Coleman was destined to create a safe, sanctuary space for Black men on campus. He grew up the son, stepson, and nephew of pastors and has even been nicknamed “Preacher Man” by Steven Jones ’87, dean for professional development and director of the MXIBS.

“My faith is something I feel strongly about,” Coleman says. “If anybody knows anything about me, I want it to be that I’m definitely a believer.”

While he has been around the church his entire life, it wasn’t until he got to Wabash that he solidified what his faith meant to him.

“Being away from home and still trying to keep that religious connection has been a challenge, because there’s always so much going on,” says Coleman. “I had to do some reconstruction and figure out why I believe in God.

“Some of the things I do now, like what I’m involved with, or different passions and motivations, have stemmed from me reasserting why I believe. There’s definitely a higher power at work. There’s something everybody has to believe in, that they can’t really explain in human terms. But I know there’s somebody there. And I’d be remiss if I didn't acknowledge that, and give thanks, whether it’s God or somebody else. For me, it’s God.”

The Bible verse that has become one that guides Coleman is Philippians 4:5-7: “Let your gentleness be evident to all. The Lord is near. Do not be anxious about anything, but in every situation, by prayer and petition, with thanksgiving, present your requests to God.”

Those who have been tackled by the 255 pound defensive lineman or who have witnessed his 48-foot weight throw probably don’t think of “gentleness” as a first-word descriptor of Coleman. But he is seen around Wabash as a thoughtful, quiet listener.

“His number one quality—he gets quiet and he’s able to process stuff,” says Clyde Morgan, head track and field coach, “because he’s listening.”

Coach Olmstead was right—Coleman does belong at Wabash. Yes, he is a great student and athlete, but also because these past four years Wabash has needed Coleman’s voice just as much as his presence on the field and in the classroom.

“Kenny is definitely a leader and has the ability to influence those around him to do the right thing,” Olmstead says. “He has added tremendous value to our campus throughout his career here. Kenny didn’t just go through the motions at Wabash.”